Skip to content
Hey folks,
In this week’s News/Q&A show we focus mostly on the suddenly developing story of Ahmaud Arbery out of Georgia, which appears to be the next faux “black man killed by white people for reasons of racial malice” story being developed by the mainstream media, now that their COVID hysteria is winding down.
Enjoy the show:

I’d also like to mention our sponsor, CCW Safe, a provider of legal membership services (what many mistakenly refer to as “self-defense insurance”).  In effect, CCW Safe commits to covering your legal expenses if you’re involved in a use-of-force event, subject of course to their conditions of membership.

I’m a member of CCW Safe myself, as is my wife, and I encourage you to consider them as a means of ensuring you have the legal resources you need to win the legal fight if you’re ever involved in a use-of-force event.  You can learn more about them by clicking the image or link below: 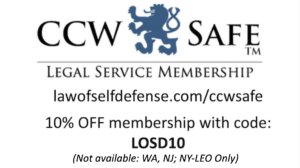 The basic facts of the Ahmaud Arbery case appear to be that Arbery, a black male, was shot and killed in Georgia in a confrontation with two white men.
The white men say they observed Arbery run through their neighborhood, recognized him as resembling a burglar active in the community, armed themselves, and pursued him consistent with Georgia citizen’s arrest law. They say that when they approached Arbery to speak with him, he attacked one of them, and the other of them shot him. Arbery would die of his wounds.
Arbery is, obviously, not present to speak for himself, but the alternative narrative being developed by the media and the racial grievance industrial complex is that Arbery was merely engaged in the healthy activity of jogging when these two white men, both “suspected” of being white supremacists, shot him dead for the crime of “jogging while black.” 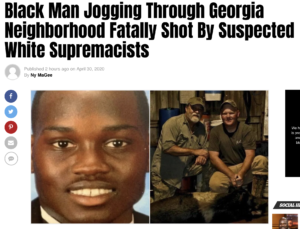 https://eurweb.com/2020/04/30/black-man-jogging-through-georgia-neighborhood-fatally-shot-by-suspected-white-supremacists/
Actual evidence of “white supremacy”? None is offered.
The shooting took place a couple of months ago, has been reviewed by multiple prosecutors, and in every case a prosecution of the two white men has not been deemed justified.
Interestingly, in just the last few days, news coverage of this two-month old event has absolutely exploded–a pattern that will be familiar to the Law of Self Defense community form how the Zimmerman case was initially not seen as a big deal until it was propagandized explosively into the American awareness.

We don’t yet know what the actual evidence will show in this case, but it certainly appears that we’re about to be taken on another hysterical national racial roller-coaster ride by the racial grievance industrial complex and their minions in the mainstream media, for whom hate and hysteria are their life-blood.
In any case, we’ll naturally be following the case closely.
In other news, for those of you who missed last weekend’s “Law of Self Defense LEVEL 1 Live Online Class,” I have GREAT news–we recorded the class and now have it available as an on-demand replay.
Even better, you can watch the first hour of that 7.5-hour class–Module 1. Introduction–for FREE, with no cost or obligation, to see if you’d like to take the opportunity to enjoy the entire course in an on-demand fashion at your convenience.
To do that just click the image or link below: 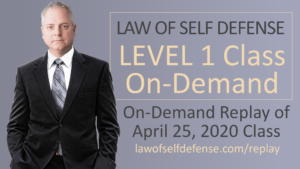