Arguably the most interesting part of today’s proceedings happened in the last seven minutes or so before the court recessed for the day. That’s when the prosecution complained about some informal conduct by the defense counsel, only to find itself scolded by Judge Cahill, who then fairly stormed out of the court room.  I’ll come back to that in just a moment, along with video of the event.

As a brief summary of the substantive parts of the day, however, the afternoon saw four prospective jurors subject to voir dire.

The first of the afternoon’s prospective jurors, #90, was rather quickly dismissed for cause when it turned out he was wildly biased against the police, whom he characterized as systemically racist and over-militarized.

The second prospective juror, #91, was a retired female who self-identified as black.  She was found acceptable by both the defense and prosecution and was seated as the 11th juror for this trial.

The third, #92, was another female, and she was also acceptable to both the defense and prosecution and was seated as the 12th juror for this trial.

The final prospective juror, #95, a male, was dismissed for cause by Judge Cahill after questioning by defense counsel Nelson revealed that #95 would be too concerned about the safety of his family to take on the responsibilities of a juror on this trial.

For what it’s worth, the two seated jurors, #91 and #92, both struck me as perfectly reasonable jurors for this trial, especially in the context of some the patently and outrageously biased prospective jurors we’ve seen coming through voir dire so far.

To understand this afternoon’s scolding, we first have to know that the defense has filed motions for the court for a continuance (delay) of the trial, as well as a change in venue for the trial, in part on the basis of the city of Minneapolis agreeing to a $27 million settlement to the Floyd family, as well as the city’s ongoing public discussion of that settlement.

The concern, of course, is that the city agreeing to this record-breaking settlement would suggest to prospective jurors that, well, if they city agrees there was a $27 million mistake in this case then surely something wrong must have been done. And if done, surely done by the defendant in this trial, Derek Chauvin.

About mid-afternoon there was some informal discussion in the court room about these motions to continue and change venue, in part because the written briefs of them were due to Judge Cahill by the end of business today, and he intends to rule on those motions tomorrow morning.

As part of that informal discussion, defense counsel noted that even this very morning the city was again having a meeting with press in which they were discussing the settlement, as yet another example of conduct that calls for a continuance and change of venue.

Keeping that background in mind, as the court prepared to recess for the day today, Prosecutor Schleiter informed Judge Cahill that he disagreed with the precise manner in which defense counsel had characterized the morning’s press briefing.  It was not, for example, a press briefing specific to the settlement, but rather the normal weekly press briefing where reporters happened to ask questions about the settlement.

This statement by the prosecution may or may not be accurate—I neither recall the details of how the defense characterized the press briefing, now am I going to bother finding a recording of that meeting to see if that characterization was correct.

The important part here is that after complaining about this supposed mischaracterization of the press briefing, Prosecutor Schleiter asked the court to require that any such factual statements in court be done formally, as a formal offer of proof or a declaration, with supporting exhibits, and affidavits, and so forth.

Now, technically, this is indeed precisely the way substantive factual claims are supposed to be submitted in court.  These procedures help ensure a clear record of the trial, and a clear record is important, especially if the matter proceeds to appeal.

Judge Cahill, however, wasn’t having any of this.  He literally interrupted Prosecutor Schleiter, saying “let’s just stop right there.”

The Judge noted that unlike the prosecution, defense counsel Nelson was essentially working by himself.  The state, he noted, now had ten or twelve lawyers working on their side of the case. The state had plenty of lawyers that could sit outside the court room and churn out briefs and exhibits and affidavits.

The judge was not, however, going to require that Nelson have to stop jury selection proceedings so he could step out of the court room to formalize what was really just informal commentary amongst the parties and the court at the start of the business day.  To expect that to occur would be completely unreasonable.

Further, although Judge Cahill didn’t mention it explicitly, it’s worth noting that the judge, too, is largely “working alone.” For example, he has just received this evening the final defense motions arguing for continuance and change in venue, and also the state motions in opposition.

As a result, Judge Cahill will likely spend much the rest of the evening reading these documents, and the state’s in particular is likely to be extremely lengthy and dense (all those state lawyers have to produce work product, after all, or why be there).  Perhaps the state has 12 lawyers to write up its motions, but Judge Cahill only has Judge Cahill to read it all, and to do so in a sufficiently thorough manner to allow arriving at a sound decision.

Ultimately, Judge Cahill rather tersely told the prosecution to, basically, quit commenting on defense counsel’s performance (and noted the same condition would be applied to defense), and stormed out of the court room.

There’s nothing substantive about all this, at least standing alone, but I thought it sufficiently noteworthy to share.  In any case, here’s the video of that last 7 ½ or so minutes of today’s court proceedings:

Juror #90: “Police Are Systemically Racist”: Excused for Cause

I’ll only spend a moment on prospective juror #90, given that he was rather quickly dismissed for his anti-police bias, but that bias was so over the top, and #90 was so blind to how over the top it would appear to others, that it’s worth touching upon in a summary fashion.

Once again, voir dire started out with #90 swearing under oath that he could and would be a fair and impartial juror in this case, and it was only the availability of the juror questionnaire that tore this affectation apart. It was also particularly telling that when #90 expressed concerns about his safety if he returned a particular verdict, the verdict he was worried about was “guilty”—he believed that supporters of Chauvin might hunt him down to cause him harm.  This is akin to the previous prospective juror who blamed the rioting, looting, and arson in Minneapolis on the “boogaloo bois” rather than on pro-Floyd, pro-BLM rioters. 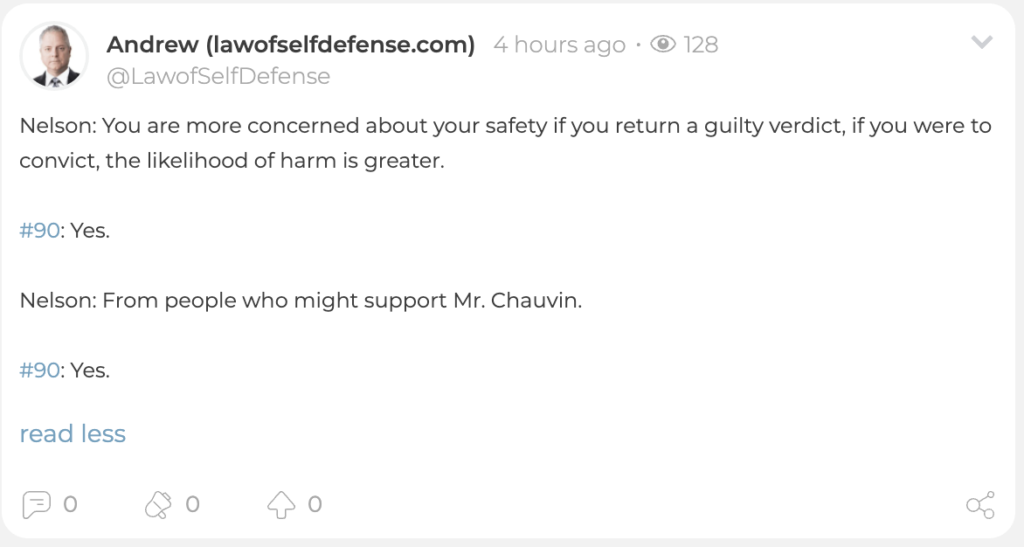 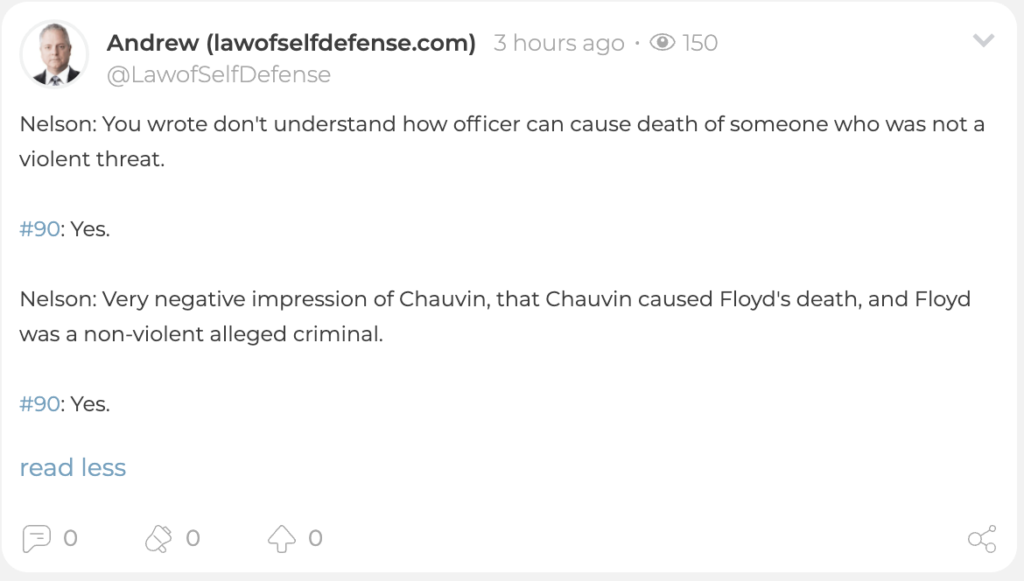 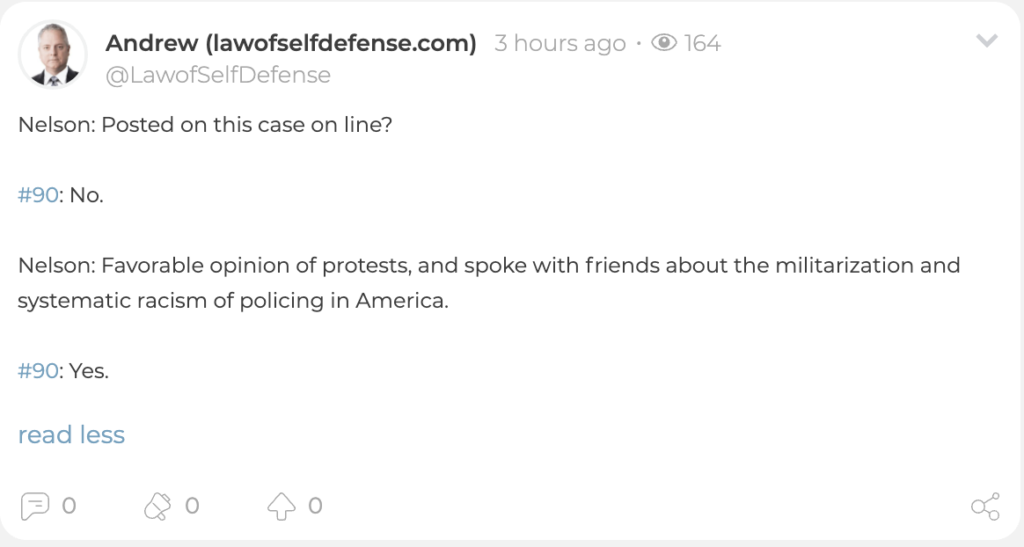 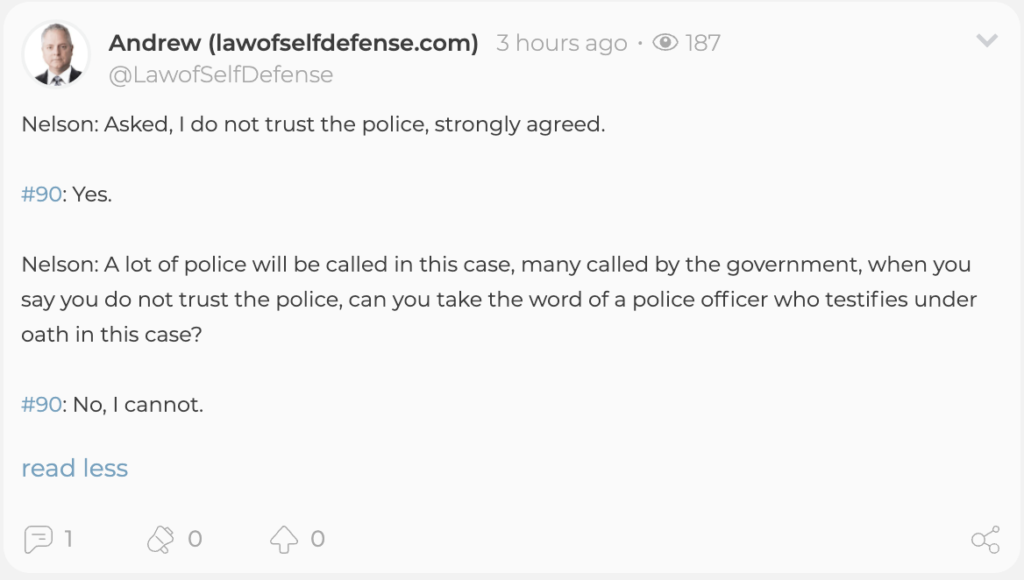 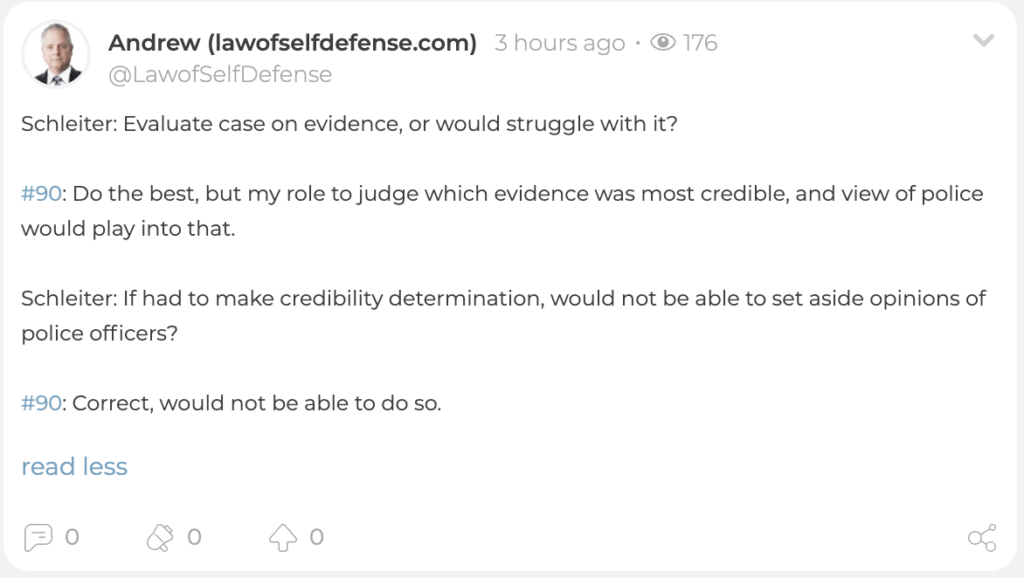 Here’s the video of the voir dire of prospective juror #90, dismissed for cause because of anti-police bias.

Juror #91 came across as intelligent and thoughtful, and about halfway through her voir dire she self-identified as black.  She’s a retired businesswoman with an undergraduate degree in child psychiatry.  Overall, she struck me as a perfectly reasonable juror, from the perspective of the defense and any prosecution genuinely interested in justice in this case.

She did note a perception that the criminal justice system tended to treat blacks worse than whites, but characterized that as most likely due to economic reasons rather than racial reasons.

On how to resolve a dispute, she insisted on a hard focus on the relying on the actual facts.

Her views of Chauvin and Floyd were both neutral, on the grounds that she lacked the facts to have an informed opinion. She had a favorable view of the police and had a relative who was a law enforcement officer.

She thought the events in Minneapolis after Floyd’s death had largely been negative for the community, noting the rioting, looting, and arson.  Despite this, she had a favorable view of Black Lives Matter, in these sense that “I’m black, and my life matters.”  She had a neutral view of blue lives matter, but noted that everyone’s life matters. 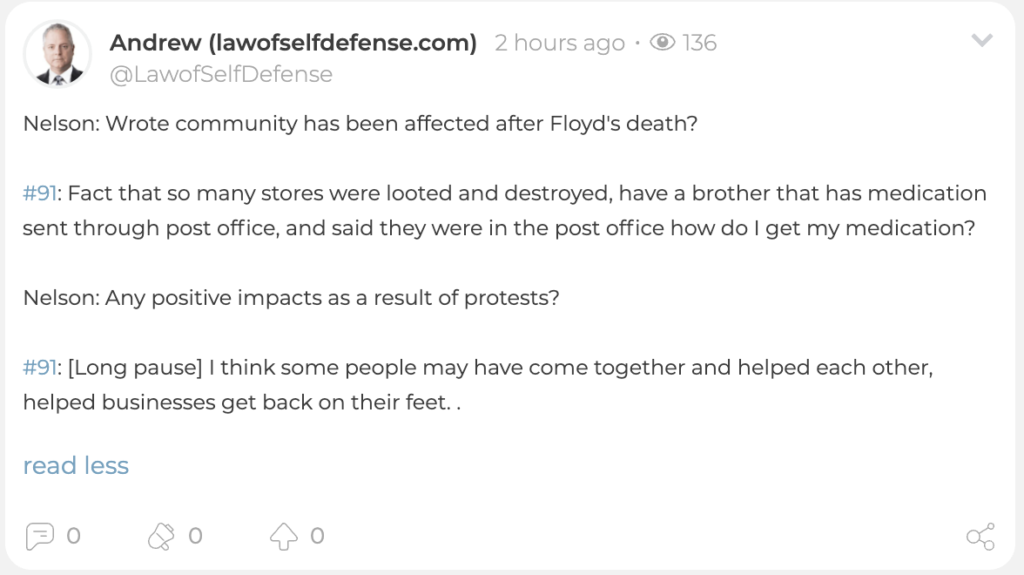 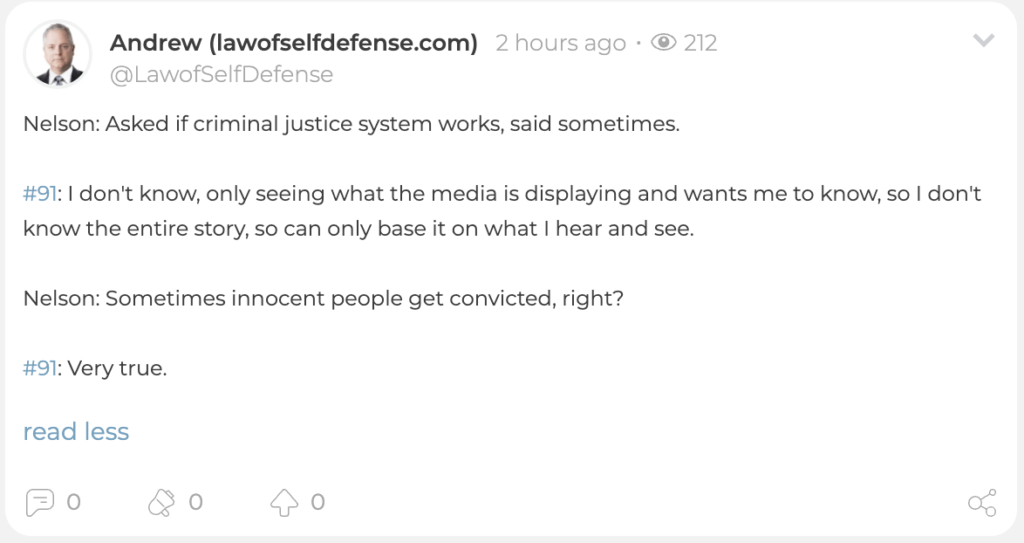 Here’s the voir dire of juror #91, seated as the 11th juror on this trial:

Juror #92, noted that she would form her opinion based on the facts, and was not someone who would compromise on what she believed on an important matter simply to achieve a consensus.

She acknowledged that two people could see the same event and walk away with different perceptions, and that didn’t necessarily mean either was lying. She also acknowledged that a person’s training and experience would likely influence their reasonable perception of events.

She noted somewhat negative perceptions of both Chauvin and Floyd, but noted this was based merely on media reports, and acknowledged she didn’t actually have any facts for an informed opinion.

Although #92 did express a perception that the criminal justice system did not treat black and white suspects in the same way—a perception she agreed was not based on any personal experiences—she had a very favorable view of the police, and strongly opposed de-funding the Minneapolis police department. At the same time, she favored needed reform of the police. 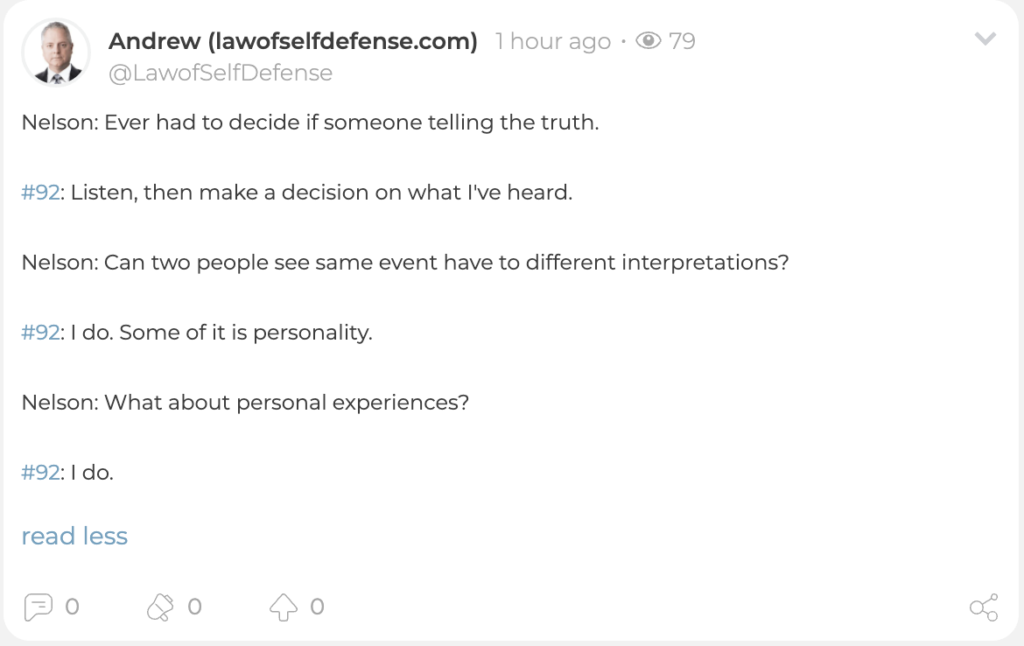 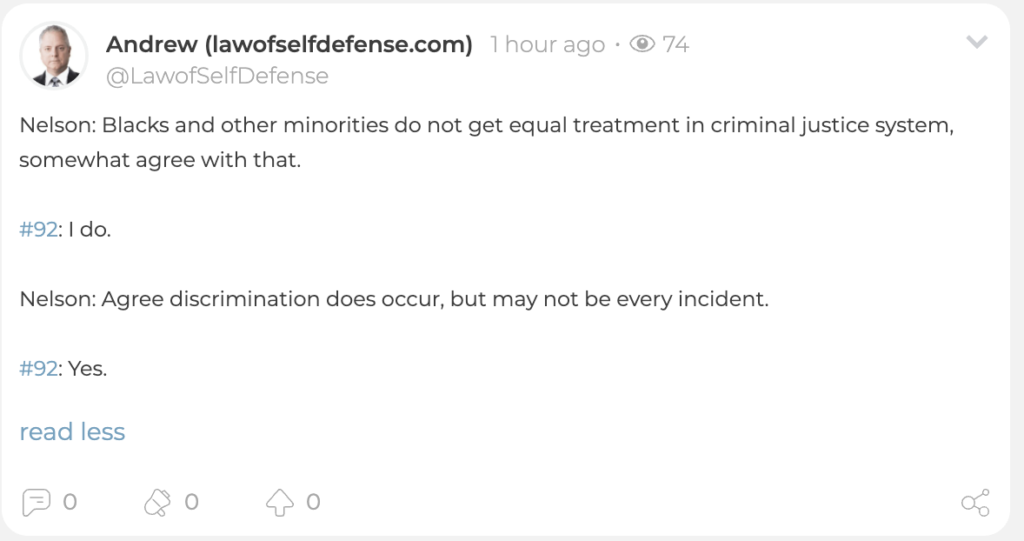 Here’s the voir dire of juror #92, seated as the 12th juror on this trial:

And that’s all I have for all of you today. I’ll be covering the trial proceedings in real time again starting tomorrow, and expect to have a mid-day and end-of-day report for all of you, as usual.