As a reminder, I am “LIVE Parlering” the trial in real-time over at Parler.com, which you can find using my Parler handle:  @LawofSelfDefense.

This morning the court first had a debate on whether the state should be permitted to introduce expert witness testimony on George Floyd’s state of mind, which the defense argued would open the door to admission of Floyd’s year-prior arrest-related drug ingestion event.  Judge Cahill indicated he’d have a decision on all that on Friday (tomorrow). More on that in a moment.

Following that debate the court conducted voir dire on four jurors, all of whom happened to be female.

The first, #86, was struck quickly as she told Judge Cahill she had formed a fixed and biased view of the defendant.

The second, #87, was struck by the state, leaving the state with four strikes—more on her in a moment.

The third, #88, was dismissed by the court because she was personally familiar with one of the key witnesses in the case.

Finally, #89 was seated on the jury, and is now the tenth juror seated in this trial—more on her in a moment.

For roughly the first half hour of today’s proceedings the state argued for the admission of testimony for one Dr. Vincent, who is prepared to offer expert testimony as to George Floyd’s state of mind during his 2020 encounter with police.

In effect, the state is arguing that they expect the defense to claim that Floyd was resisting arrest and that his conduct was driven by his illicit drug intoxication.

The state instead would like to argue that Floyd may have been non-compliant, but that this must be distinguished from resisting because the non-compliance was not voluntary and intentional.

Rather, Floyd’s non-compliance was beyond his control, and driven by anxiety and PTSD of just having had one of the officers point a gun at him, as well as by Floyd’s claustrophobic fear of being placed in the squad car.  Dr. Vincent will purportedly testify that Floyd’s conduct was reasonable for anyone in those circumstances.

The state will also use this evidence to argue that Chauvin should have realized that Floyd’s non-compliance was not intentional and used de-escalation techniques as per Minneapolis Police Department policies.

This, the state will argue, would make Chauvin’s chosen use of force upon Floyd counter to MPD policy, objectively unreasonable, and thus the basis for criminal liability.

The defense is arguing that if the court allows this testimony by Dr. Vincent then it opens the door to admission into evidence of the entirety of Floyd’s year-prior arrest-related drug ingestion event, to rebut the state’s expert witness testimony.

In that case there was no gun pointed in Floyd’s face, he was still non-compliant with arrest, he had also ingested illicit drugs, and he made no claims of claustrophobia when placed in a squad car.

Judge Cahill seems inclined to either exclude both the state and defense offers of evidence on this issue, on the one hand, or to allow both, but not one or the other. In addition, Cahill had already been disposed to allow some portion of the year-earlier drug ingestion event into evidence, but to rebut the state’s expert witness testimony would allow all the evidence of that event. He ultimately announced that he’d have a decision on all this on Friday (tomorrow).

Here’s the video of that debate:

Juror #87, Stay-at-Home Mother of Five: Struck by the State

Juror #87, a female, and stay-at-home mother of five, who thought media reports of racism were likely exaggerated, on the grounds that the media generally exaggerates everything they cover, believed the protests following Floyd’s death were overwhelmingly negative, had a very unfavorable view of Black Lives Matter as an organization although she did affirm strongly that black lives matter, and strongly agreed that the police in her community made her feel safe, was perfectly acceptable to the defense, but was struck by the state using a peremptory challenge.  This leaves the state with four remaining peremptory challenges, after which they can have jurors excused only if they can show the court cause. 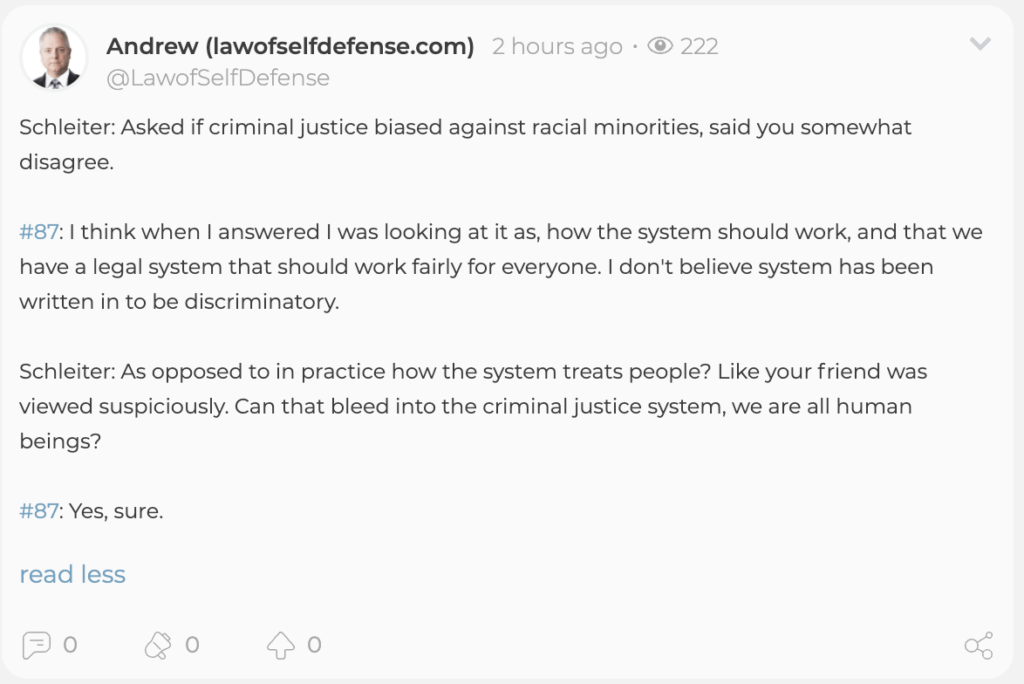 Here’s the video of the voir dire of prospective juror #87, now dismissed:

Juror #89, Registered Nurse, Cardiac and Respiratory: Seated on the Jury

Juror #89, a long-time registered nurse, currently works providing ventilation support to COVID patients.  She had previously worked as a cardiac nurse.  This experience created concern for both the defense and state, and even Judge Cahill, that she might offer her own “expert testimony” to the other jurors, but she committed to restraining herself from doing so.

In contrast to #87, #89 did not feel that the media exaggerated reports of racism, and indeed thought the truth was probably worse than what was reported.  She also believed the criminal justice system did not treat black and white defendants equally. At the same time, she agreed that just because a white police officer had an interaction with a black suspect did not make that interaction racist in nature. 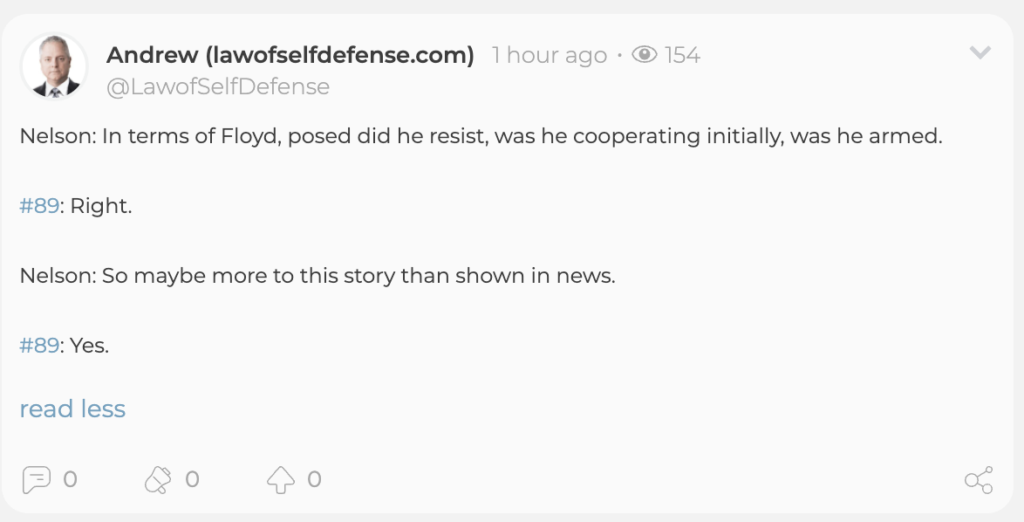 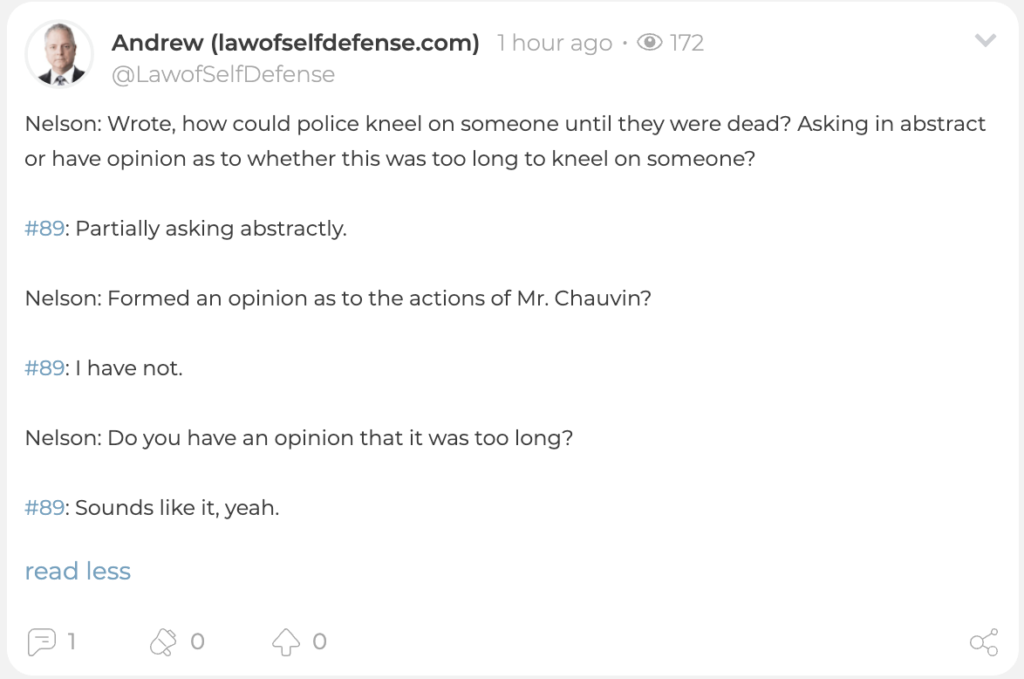 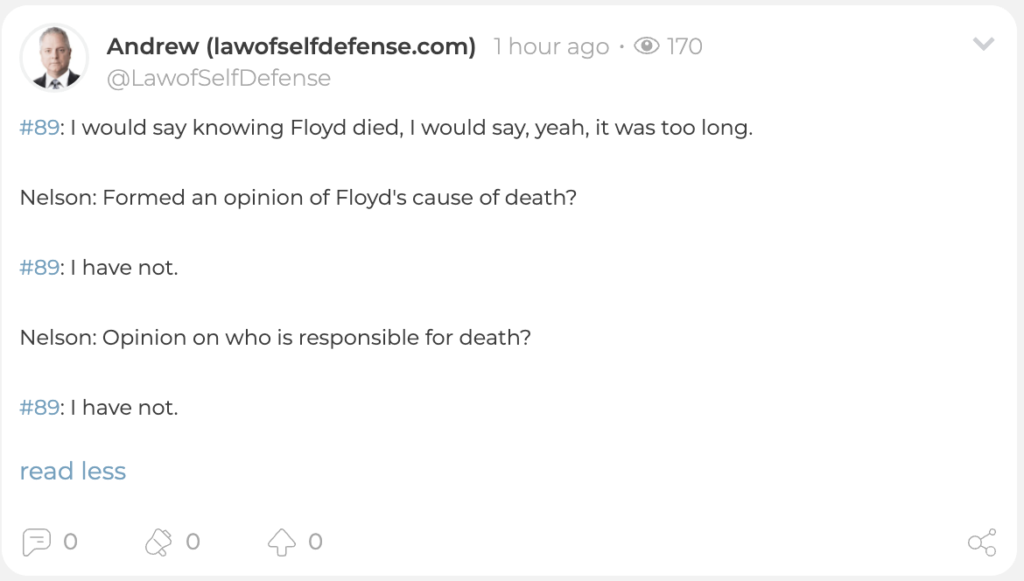 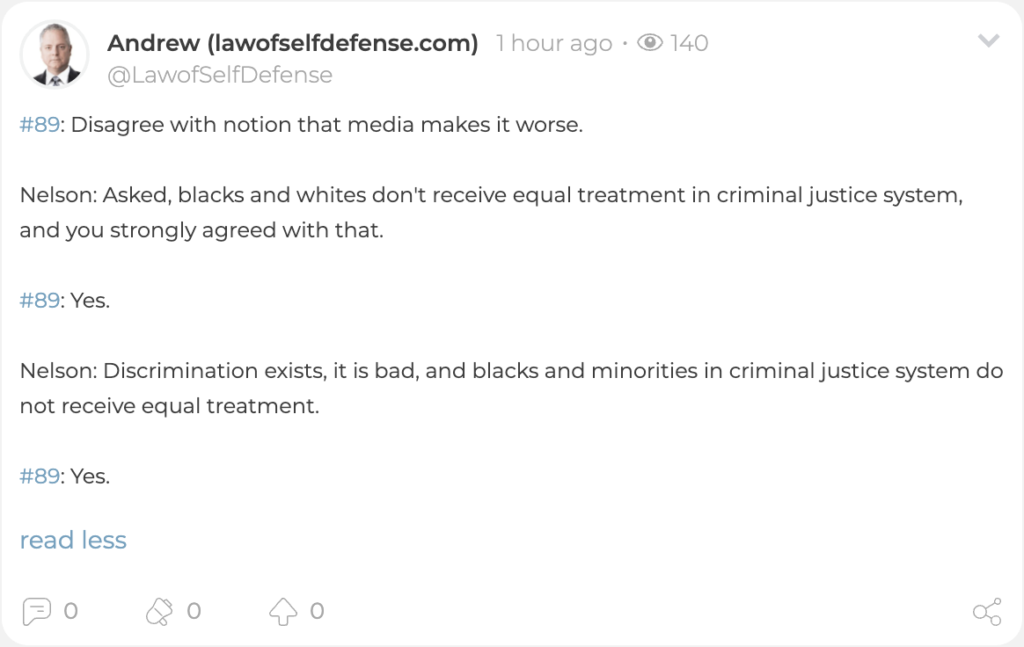 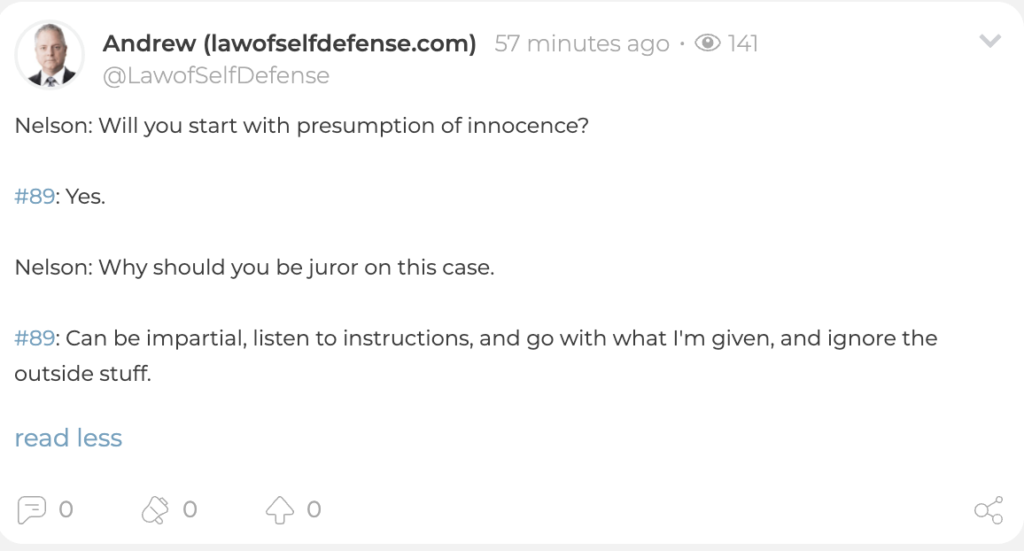 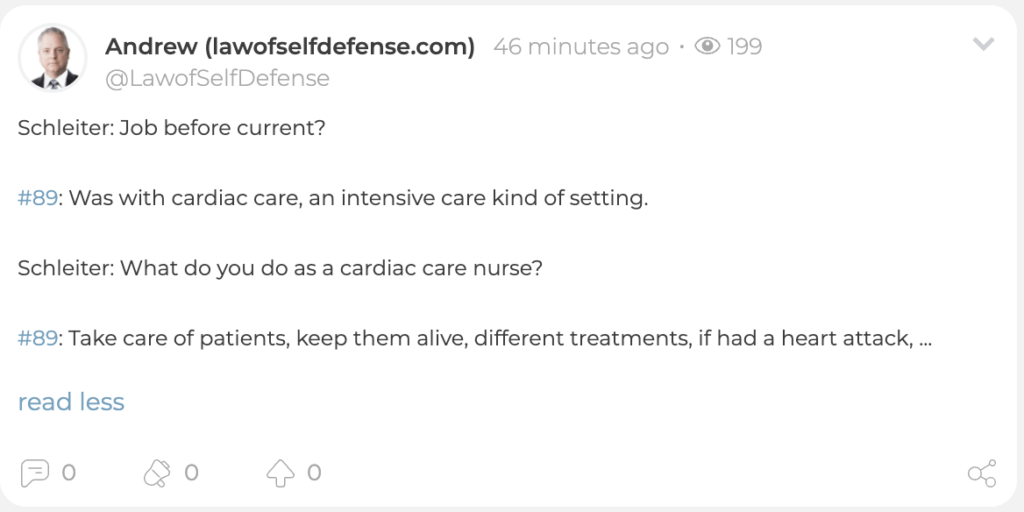 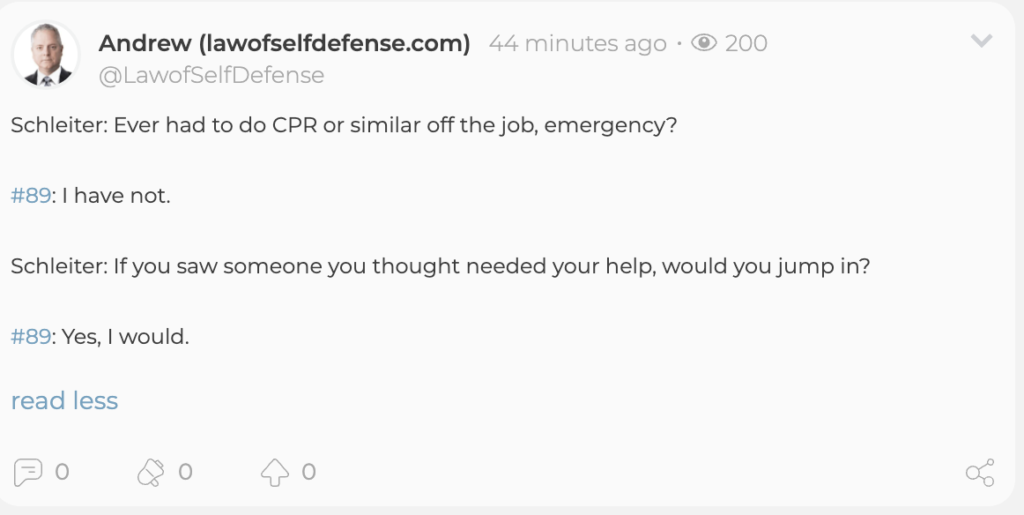 Here is the video of the voir dire of juror #89, now seated as the 10th juror on this trial:

OK, folks, that’s all I have for all of you until our end-of-day post today, after the court recesses for the day.