Two of these essentially took themselves out of the running when they professed exceptional difficulties in being able to serve without hardship–#46—or claiming both hardship and firmly established opinions against the defendant–#49.  Prospective juror #43 was also excused for some unexplained reason, and was never questioned on open microphone.

Prospective juror #44, however, was satisfactory to both the defense and the state, and was seated as the 7th member of the jury.  More on her below, as well.

Juror #42:  Stricken by the Defense

Prospective juror #42 was a young-sounding female, a recent college graduate who described herself as a “genuine person” who looks for “true friendship.”

When asked by the defense if she’d ever in her personal or professional life been in a position where she had to resolve which of two sides in an argument was more likely telling the truth, she said she never had been—which seemed odd for an adult to say.

When asked defense about evidence that might appear “very clear,” #42 indicated that she would give very clear evidence—such as a video in particular—more weight than she would witness testimony.

Asked by the defense if she’d ever had the experience of believing she was 100% right about something only to learn later that she’d been mistaken, #42 said she’d never had such an experience—which, again, seemed odd for an adult to say.

When asked if she would be able to apply the law as instructed, even if she thought the law was wrong, #42 claimed that she would.

So far so good, but as we’ve seen before the wheels began to come off #42 when the defense turned to her juror questionnaire.

When asked her opinion of Chauvin in the questionnaire she had responded somewhat negative, which is not too concerning for the defense, but then wrote out “Chose this because it went on so long,” meaning Chauvin’s knee on Floyd’s neck.

Asked to explain in court today, #42 told the defense, “from what I saw, as a human, it did not give me a good impression.”  The “human” reference would have been particularly alarming to the defense, as one must presume #42 would never view the video as a non-human.

As the defense explored #42’s perception of the video further, she agreed that it was her perception that Chauvin had treated Floyd in a manner that was inhumane.

Juror #42 also had an inflexible belief in the need for “police reform”:

She also testified to having participated in BLM marches:

In exploring her views that blacks and other minorities do not receive equal treatment as whites in the criminal justice system, she based this belief on “what was shown in the world this past year,” also suggesting inflexibility on this issue:

She also testified that she’d had friends who had been mistreated by the police, but only friends who were people of color, which I took to indicate that she believed that the mistreatment was racially based:

Perhaps most alarming about #42, however, was her apparent belief that her service on the juryr would be a mission in pursuit of some greater good.  In her juror questionnaire, when asked if she wanted to serve on the jury, she responded that she did, and added:

“I am a recent college grad, and I believe there’s a reason for everything, this is a global case and it’s important to put everything aside and be present for this trial.”

Prospective juror #48 was a male who had previously served 8 years in the Army Reserve in a maintenance company, and who had at one point been deployed to Iraq as a sergeant (E-5).  He’s currently in a management position working with diverse colleagues.  He describes himself as easy going, with a good sense of humor, and a wife and small kids at home.

When asked by the defense if he’d ever had to resolve disputes between others he indicated he had, and that his process was to understand where both sides were coming from, use his experience, and gather additional sources of information on the issues in dispute.  In other words, essentially the job description of a juror.

When asked by the defense if the community had been negatively or positively affected by the events around Floyd’s death, #48 indicated that he thought both were true:

He also distinguished between peaceful protests and rioting, but noted that they often seemed to blend into each other:

Asked by the defense if he thought blacks and whites were treated differently by the criminal justice system, #48 somewhat disagreed based on his own personal experience.

Asked by the defense if police in his community made him feel safe, he somewhat agreed, indicating that the police do make him feel safe and that he had no concerns about police.

Asked his opinion on demands to defund the Minneapolis Police Department, he somewhat disagreed, and explained that he didn’t really know what that policy actually sought, and also that people advocating for that policy themselves don’t appear to fully understand the ramifications:

Asked by the defense if, because of their dangerous jobs, police officer decisions on duty ought not be second guessed, he wrote in his questionnaire that he somewhat agreed.

He explained today that what he meant was that, based on his own personal training experience in the military, he imagined that police training and practices might involve conduct that looked very negative to untrained observers but which might be perfectly normal.

He did, however, acknowledge that sometimes police did need to be questioned.

When asked on the questionnaire whether he wanted to be a juror on this case, he had indicated that he was unsure, primarily out of concern for publicity and possible safety of himself and his family. That remains true, although he was fully willing to serve on the jury if chosen.

Ultimately the defense passed for cause, meaning the defense found #48 to be an acceptable juror.

At that point Prosecutor Schleiter took over questioning of #48 for the state.

Schlieter seemed particularly concerned about #48’s awareness that untrained observers might negatively misinterpret conduct by trained persons, as well as that being informed about that training might be necessary for that observer to properly understand what they had seen:

Schlieter was also concerned by #48’s description of the Floyd video as “very quick and stressful,” as well as #48’s belief that he would need more context about what led up to the event in order to have an informed opinion:

#48 had also indicated that one of the factors increasing the stress of the situation for the officers involved was the crowd that grew at the event, and their shouting at the officers.

This would be a particular sore point with Schleiter, as the state will certainly call some of that crowd as witnesses, and they would not want a juror who believed that those witnesses had actually contributed negatively to the event.

The voir dire of prospective juror #44 actually took place prior to the of #48 (as the numerical sequence suggests), and she was questioned by the defense prior to lunch and by the state immediately afterwards.

Prospective juror #44 was a woman who was described as a C-level executive working in a healthcare-related non-profit, and who saw her mission as improving her community’s healthcare and the life of others generally.

In that role she’d apparently had previous positive contact with Attorney General Ellison, although nobody appeared to see any reason why this should disqualify her as a juror. She’s also the single mother of two teenagers in high school.

Asked by the defense about her initial reaction to knowing she was a potential juror on this case, she responded that she was “kind of terrified” given the high profile of the case:

She expressed that she was not so much worried about physical safety as about the possibility of harassment, given how high emotions are running in this case. She also noted that anyone who claimed they weren’t worried about this possibility was lying.

In many respects, #44 seemed well suited as  juror, from a thought-process perspective.

She acknowledged the importance of knowing both sides to any dispute, gathering additional information when available, and recognized that it was normal for people to have different views of the same matter.

She also acknowledged that she had to arrive at a verdict based on the evidence shown in court, and not what she might have learned elsewhere. Remarkably, she several times referenced her belief that the media was biased generally.

Prospective juror #44 also acknowledged that while what she saw of the video of Floyd’s death created a negative impression for her of Chauvin, she was aware that she doesn’t know the laws and procedures for police detaining a suspect.

She noted also that Floyd dying was surely not the intended endpoint for police procedures, and also expressed the belief that none of the officers involved in this event went into it planning that Floyd would die.

She also noted that the police in her community contribute to her safety, and appeared to have no negative perceptions of the police generally.

However, she also had definite opinions on systemic discrimination and racism.

Asked if media exaggerated discrimination, she believed it did, but also expressed the belief that blacks and native Americans have been disenfranchised by outdated laws and policies, although she put this down primarily to a consequence of implicit, rather than explicit, discrimination.

Interestingly, #44 mentioned Native Americans multiple times, and at one point used the racial term of art “BIPOC” which I understand to mean “black and indigenous people of color.”

Ultimately, the defense passed on cause for #44, meaning they found her acceptable as a juror.

Prosecutor Schleiter once again handled the voir dire for the state.

When he explored #44’s slight disagreement with defunding the Minneapolis Police Department, she re-affirmed her position that the police helped her feel safe: 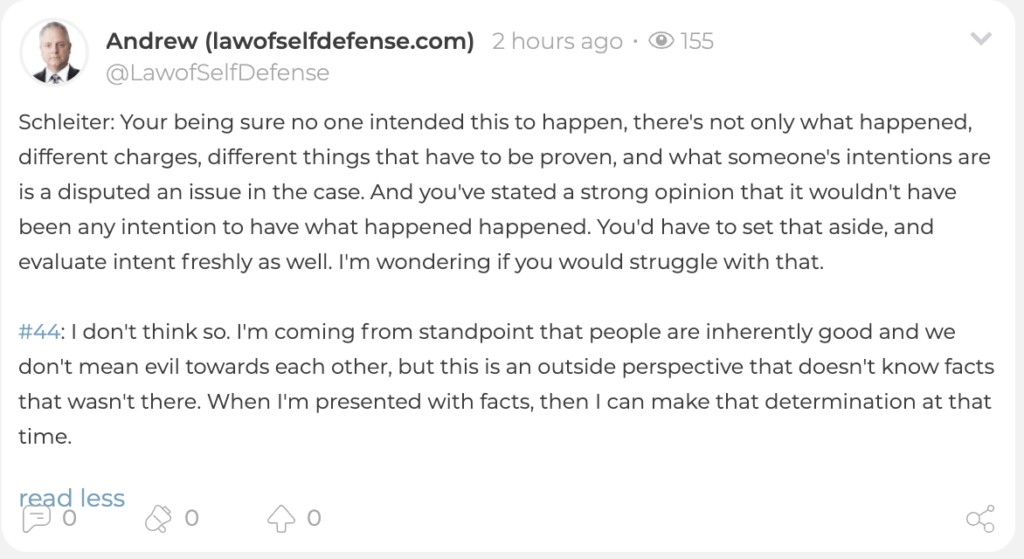 She also indicated that she would have a generally lower opinion of a person if she learned they used illegal drugs, mostly because doing so was a poor life decision.

Despite this, Schleiter also passed on cause, meaning the state found #44 acceptable as a juror.

As a result, #44 became the 7th juror seated on this case.

OK, folks, that’s all I have for all of you today, and for the weekend. We’ll be back to our live coverage of Minnesota v. Chauvin when court resumes with jury selection on Monday at 9:00am CT.