Unfortunately, it quickly became apparent that each of these three jurors had deep-seated and emotional biases against Chauvin.  The first two attempted to pretend this was not the case but were exposed by their responses to the juror questionnaire they (and all prospective jurors) completed last year, and in the case of #40 also by his social media posts (which were searched by the defense team).

Prospective juror #41 had as deep-seated a bias against Chauvin as the others, but I’ll give her full credit for immediately and explicitly citing that bias the moment she came into court.  So, she was honest, and praise for that.

Less credit to Prosecutor Schleiter who actually tried to salvage this juror by convincing her that despite her protestations she could surely be fair and impartial.  Fortunately, he was unsuccessful.

Because of her candor in announcing she could not be fair and impartial, #41 was removed for cause, and did not require the defense to burn another peremptory challenge.

Prospective Juror #39: Stricken by the Defense

The first portion of the defense voir dire of prospective juror #39, a male, was rather uneventful, except that the audio demeanor of #39 struck me as that of someone who was rather stoned.

Things came off the rails rather quickly, however, when defense counsel Nelson began referring to the juror questionnaire completed by #39 late last year, particularly in reference to questions around the bystander video of Floyd’s death.

Based on this video #39 reported having formed a very negative opinion of Chauvin:

In that questionnaire, #39 described his perception of the video of Floyd’s death as:

It was an outrageous incident. Minneapolis Police Department needs to be completely re-thought.  Officers in video were behaving more like an occupying military force than as police officers.

Prospect #39 described Chauvin’s conduct towards Floyd as showing a “lack of respect for life.”

As much as defense counsel Nelson was troubled by #39s comparing Chauvin’s conduct to acts of war, it was equally troubling that #39 seemed to expect the defense to prove Chauvin’s innocence rather than acknowledging that Chauvin was presumed to be innocent until proven guilty beyond a reasonable doubt by the state:

When pressed by the defense, #39 asserted that he could put his opinions aside, but these assertions were apparently rather lacking in credibility:

The questionnaire also revealed that #39s wife had participated in Floyd demonstrations, and had donated money to police reform policies.

Although #39 reported that he did not participate in these activities himself, this was only because he was working full-time. Were he not working he likely would have participated, he said.

When asked on the questionnaire to respond to these statement, “police treat whites and blacks equally,” #39 strongly disagreed with that statement, as well.

When asked on the questionnaire about defunding the police, #39 strongly agreed with that policy.

Prospective juror #39 also thought “blue lives matter” was rather silly, because after all, the police have guns, what do they need to be worried about?

It was also notable that #39 took an almost missionary zeal in serving on this jury:

Again, #39 adopted the position that he could imagine acquitting Chauvin, if the defense proved him not guilty, the opposite of the presumption of innocence to which all defendants are entitled:

Further, when pressed on whether he could be fair and impartial, #39 asserted that he could—but that doing so would be painful:

Ultimately, the defense was compelled to use a precious peremptory challenge to strike #39 from the jury pool.

Interestingly, after the defense exercised its peremptory challenge, the state raised a Batson challenge, alleging that the strike was based on race or ethnicity.   Although one wouldn’t know it from the sound of #39’s voice, which came across as whiter than Wonder Bread, apparently #39 self-identifies as Hispanic.

Judge Cahill rejected this challenge, however, noting that the defense had presented race-neutral grounds for the strike.

Judge Cahill also noted that at this point there had been six jurors chosen, and of considerable racial diversity—they self-identified as three white, one Hispanic, one black, and one multiracial—suggesting there was no racial motivation behind the defense strikes.

Prospective Juror #40: Stricken by the Defense

Prospective juror #40, a male, described himself as a music teacher, albeit one unable to play a musical instrument.

His voir dire also proceeded uneventfully until the defense started digging into his questionnaire, and then further into his social media posts.  This prospect also insisted early on and throughout that he could be a fair and impartial juror in this case.

In his questionnaire, #40 described his opinion of Chauvin as very negative.  The basis for this opinion?  #40 wrote:

“Seeing the look on Chauvin’s face on the video, and seeing him and other officers ignoring bystander cries to stop once Floyd was on the ground and subdued.”

He described the continued restraint of Floyd by the officers as “over the top” and “unnecessary.”

When the questionnaire asked for his opinion on Floyd, #40 responded that he’d heard that Floyd was being arrested for having passed a bad bill, “but he still shouldn’t have been treated like that.”

Prospective juror #40 then went on in his questionnaire response to write:

“Floyd had a record, but didn’t deserve to die like this by a cop who has duty to protect, who ignored his pleas, Chauvin should have stopped, and other officers should have intervened.”

When asked in the questionnaire about the property destruction and looting that took place in Minneapolis during the Floyd-related protests, #40 blamed this destruction on the boogaloo boys, rather than on Black Lives Matter, and expressed a strong interest in systematic reform of the police:

After a short break, court resumed and Nelson began asking #40 about his social media posts, which the defense had researched.

The prospective juror tried to downplay his social media activity, but this was really the nail in the coffin that ought to have been the basis for removing #40 for cause, but which compelled the defense to use a peremptory challenge.

When asked about this, #40 said he couldn’t recall posting to social media about the Floyd death. It turned out that he’d posted this:

“I went to the site of the George Floyd memorial at 38th and Chicago where he was murdered. There was a mix of all sorts of people, there were people providing food and supplies for those in need, people crying, people sharing, hugging, laughing with each other. Holy ground.  There was a time for prayer that lasted 9 minutes. Most knelt for that. Nine minutes is a long time. There is a groundswell for change. It was peaceful and beautiful and moving.”

Again, prospective juror #40 insisted that he could serve as a fair and impartial juror, which apparently is all that Judge Cahill needs to hear in order to compel the defense to burn another peremptory strike—which, of course, they did.

Here is the voir dire of prospective juror #40:

She was no less biased against Chauvin than were #39 and #40, but at least she was honest about it. Because of her candor, she was in court only about 8 minutes before being dismissed for cause, although almost half that time involved Prosecutor Schleiter trying to convince her that she was a reasonable juror for this trial.

Almost the moment she enters the courtroom, #41 tells Judge Cahill explicitly that she does not believe she can bring impartiality to this case:

Cahill informs her she could still be a juror, despite her strongly held opinion, if she can simply set that opinion aside for purposes of the trial.  To her credit, she stands her ground in her belief that this would be extremely hard for her to do. 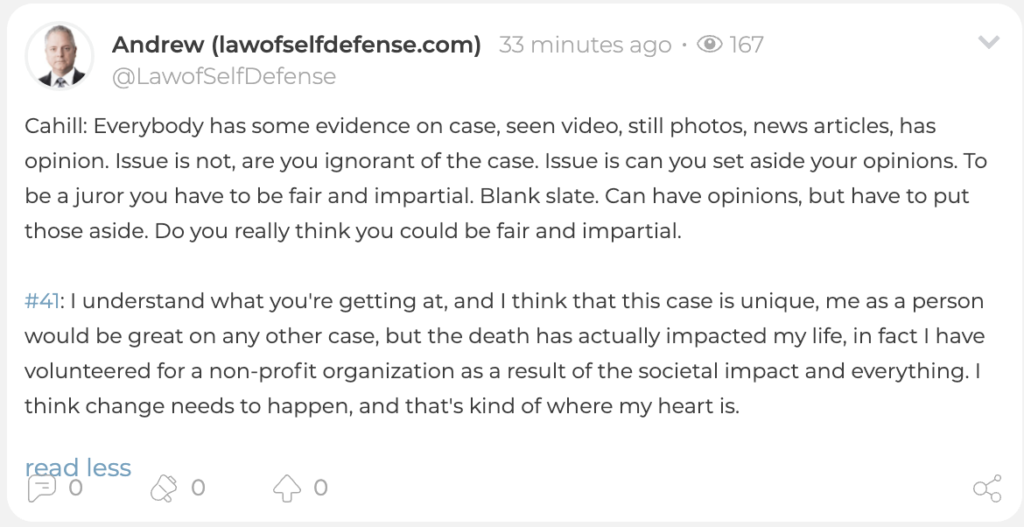 When Judge Cahill explicitly asks her if she can be fair and impartial on this case, she answers directly in the negative:  No.

You’d think that would be all she wrote for #41, but no, Prosecutor Schleiter would love her on the jury, so he takes an opportunity to try to convince her to stay.  She’s not convinced.

When he directly asks here if she believes she can give the defendant a fair trial, she says she wishes she could, but she can’t. Again, full points to #41 for honesty.

And with that, even Schleiter gave up, and Judge Cahill dismissed her for cause.

And that wraps up court for today, with proceedings to continue tomorrow morning at 9:00am CT.

We’ll continue to cover the case live on Parler tomorrow.