As a reminder, I am “LIVE Parlering” the trial over at Parler.com, where you can find me:  @LawofSelfDefense.

UPDATE:  AFB: There has been some confusion over the juror count, including on my part, so I’m updating to clarify.  Throughout voir dire the court had specified that it would seat a jury of 14 jurors–12 would ultimately deliberate, and two were alternate jurors. In fact, however, Judge Cahill has decided to select 15 jurors, in an abundance of caution to try to ensure that at least 14 show up on Monday, March 29, for opening statements.  Only 14 jurors will be sworn and seated. If all 15 chosen show up, the 15th will be sent home.

Of these seven prospective jurors, three were struck for cause by the court: one because she conceded to the court that she could not be impartial, another because of difficulty understanding English, and a third because of a sick child at home.

Prospective juror #116, a male who described himself as a fisher and hunter, was struck by the state using a peremptory strike, leaving the state with two remaining peremptory challenges.

Both of these apparently young prospective jurors struck my ear as utterly insincere in their protestations of being impartial, and highly prepped for voir dire, as if they’d carefully watched prior voir dire and prepared what they thought were “perfect juror” answers.

As we’ve seen time and again in voir dire, it was only the questionnaire completed last December that enabled the defense to smoke out these apparently wildly biased prospective jurors.

Frankly, it seems outrageous that the defense was obliged to use a strike for either of them.

Indeed, so egregious was the case of #121 that Judge Cahill, having just denied a dismissal for cause and forcing the defense to use one of their precious remaining peremptory strikes, offered to revisit the request to strike for cause if it turned out that the defense exhausted its strikes before a jury was empaneled.

Judge Cahill himself described #121 as coming across as insincere and even flippant in voir dire and in his questionnaire.  In response, Defense counsel Nelson cited a Minnesota Court of Appeals decision noting that this belief by the trial judge was alone enough to dismiss for cause.

If the call on this juror was so ambiguous as to warrant an offer to reconsider later, the call should clearly have gone to the benefit of the defendant who is supposed to be still presumed innocent. After all, how the defense makes use of its peremptory strikes to a large extent is a function of how many strikes it has remaining—the total number matters.

For those who are interested, I’ve included the video of the voir dire of jurors #115 and #121 below.

The final juror subject to voir dire today was #118, a female, who was acceptable to both the defense and the state, and was seated as the fourteenth juror in this case.  This leaves only one remaining jury seat to be filled, to allow for 12 jurors and two alternates, and Judge Cahill vowed that court tomorrow would not go into recess until the final juror was selected.

Juror #118 has worked as a social worker for the last five years, since graduating from college.  Although “social worker” might be, and probably was, a red flag for the defense, she described a favorable view of police, and apparently had frequently had police assist her in handling emergency situations with patients/clients.

Her initial impressions of the Floyd death were unfavorable to Chauvin, but she seemed sincere in claiming that this was entirely due to her information having come entirely from media reports, and that she was open minded to hearing the whole story and both sides of it.

In particular, she stated without prompting that she’d like to know to what extent Chauvin and the other officers involved had acted as they did because of training they had received. She herself, she told the court, received annual self-defense training as part of her work as a social worker.

In her questionnaire #118 somewhat agreed that blacks do not get the same treatment as whites in the criminal justice system, and attributed this feeling not to personal experience but to what she had been taught in college.

She also agreed that police made her feel safe, and strongly disagreed with defunding the Minneapolis Police Department. On the issue of police reform, she stated that in general the police were a good thing, and make a community safe, but also believed there were possibilities for reforming or improving certain aspects of policing.

She also had a neutral perception of both BLM and blue lives matter, saying that in her view all lives matter and are worthy of respect.

Ultimately, both the defense and prosecution declined to challenge for cause or strike with a challenge, so #118 became the fourteenth juror for this trial. 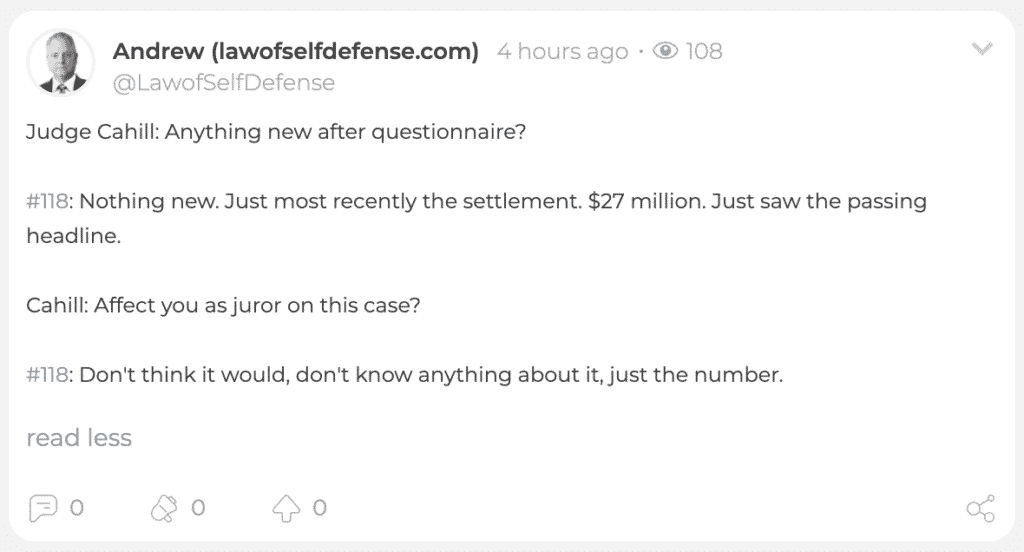 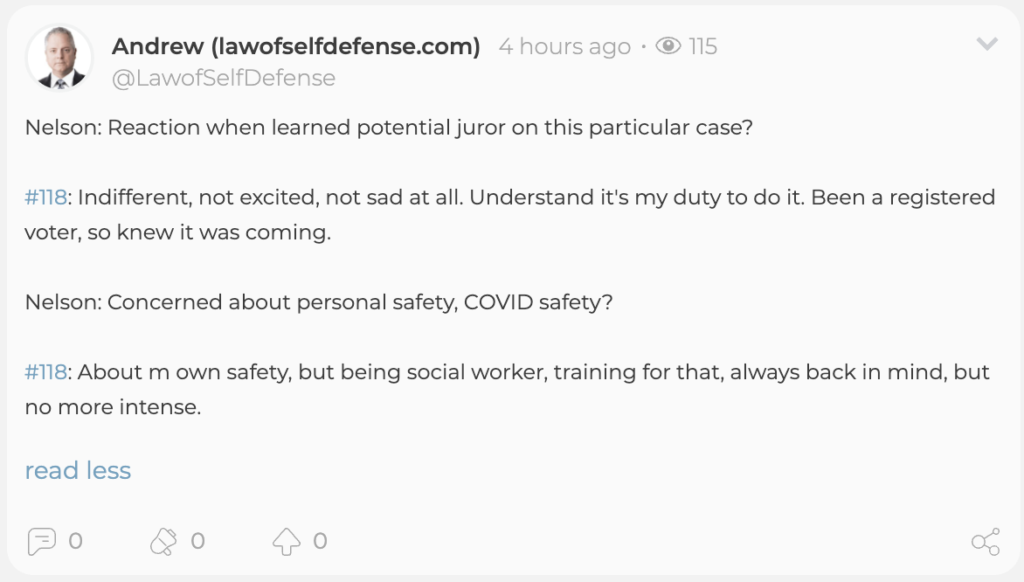 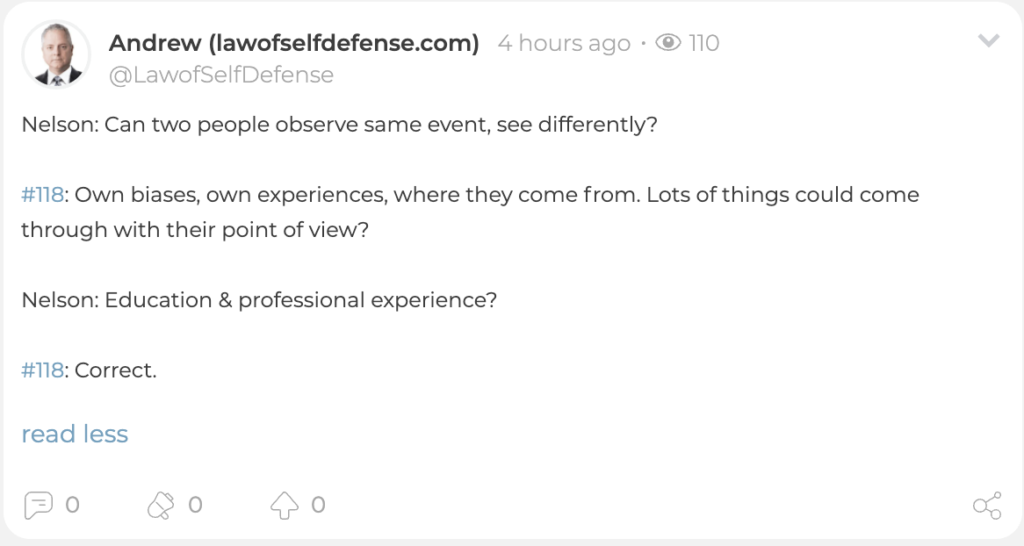 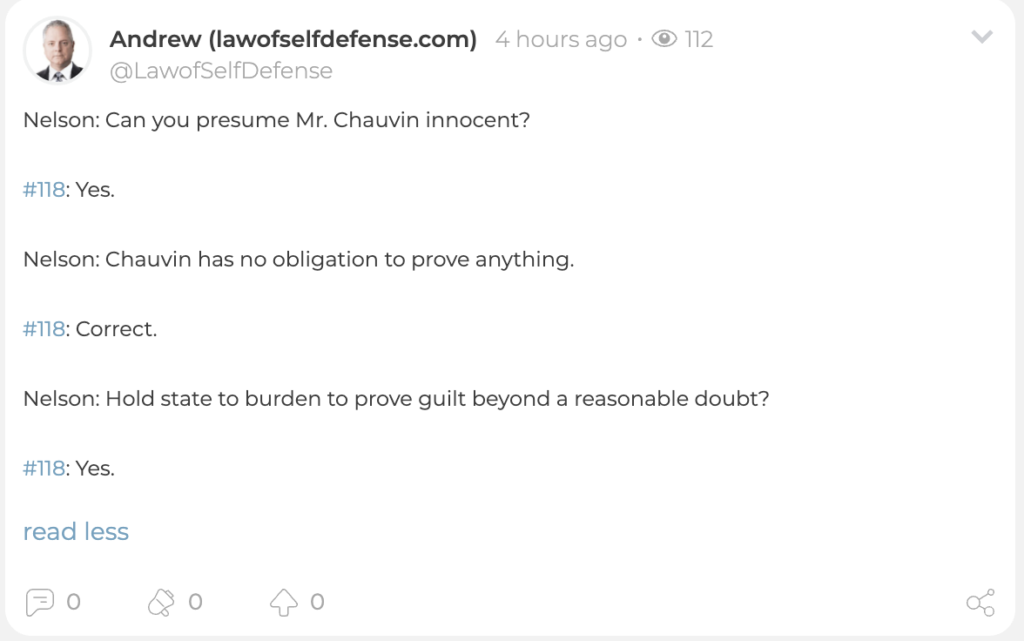 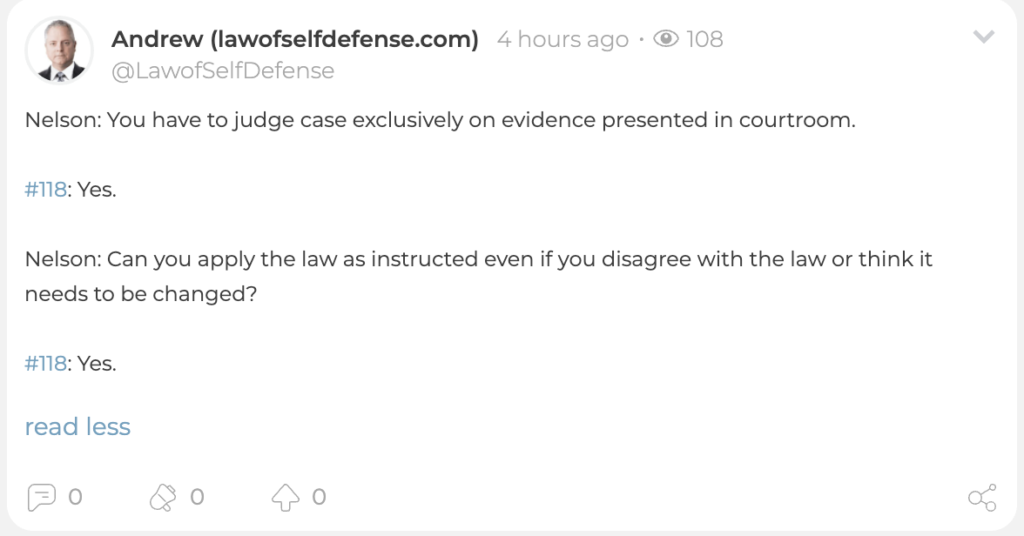 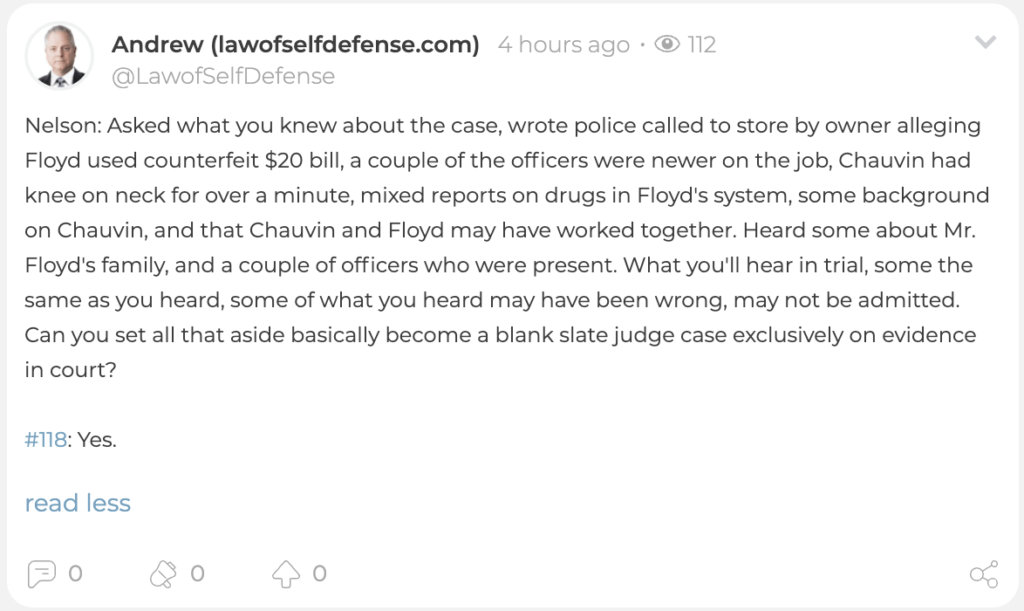 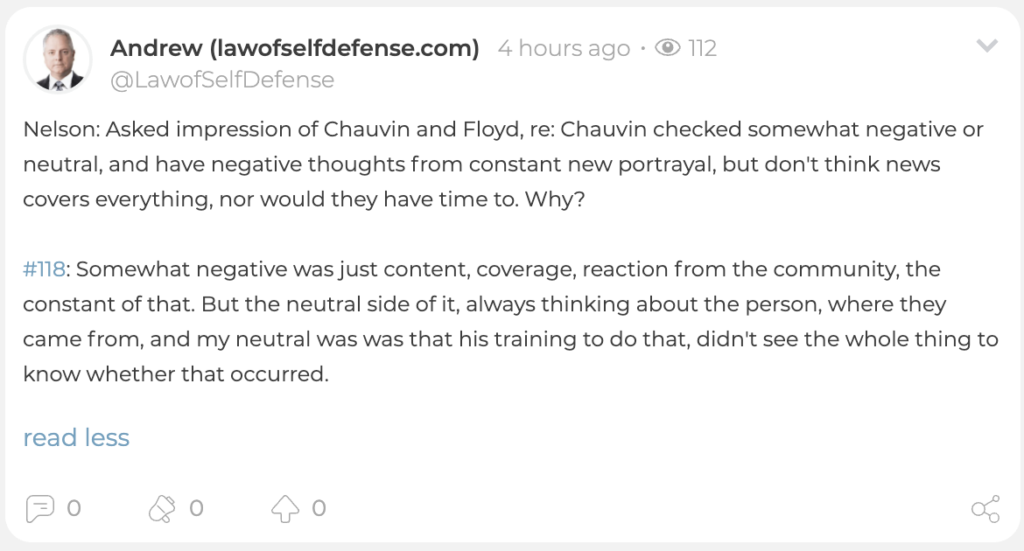 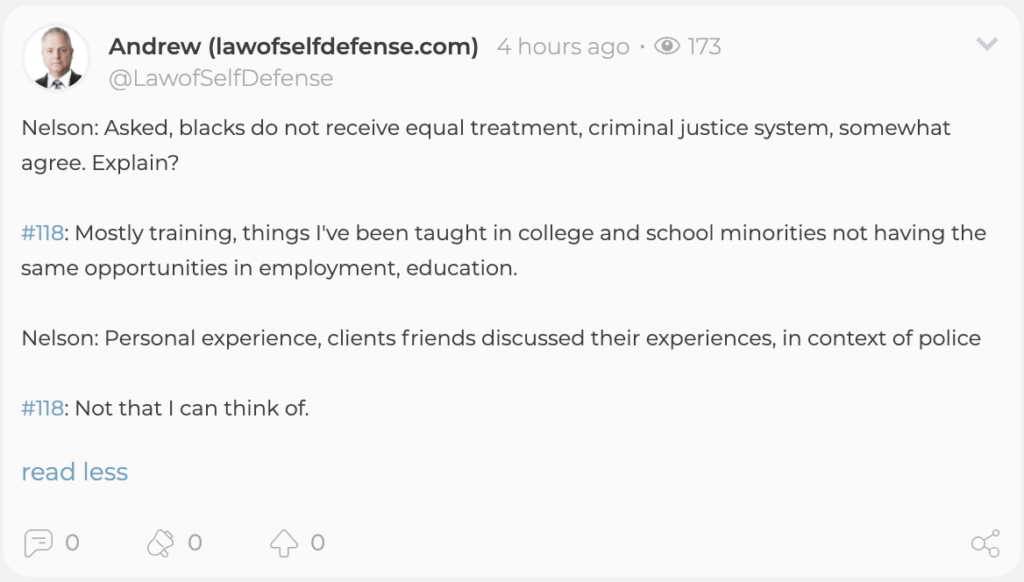 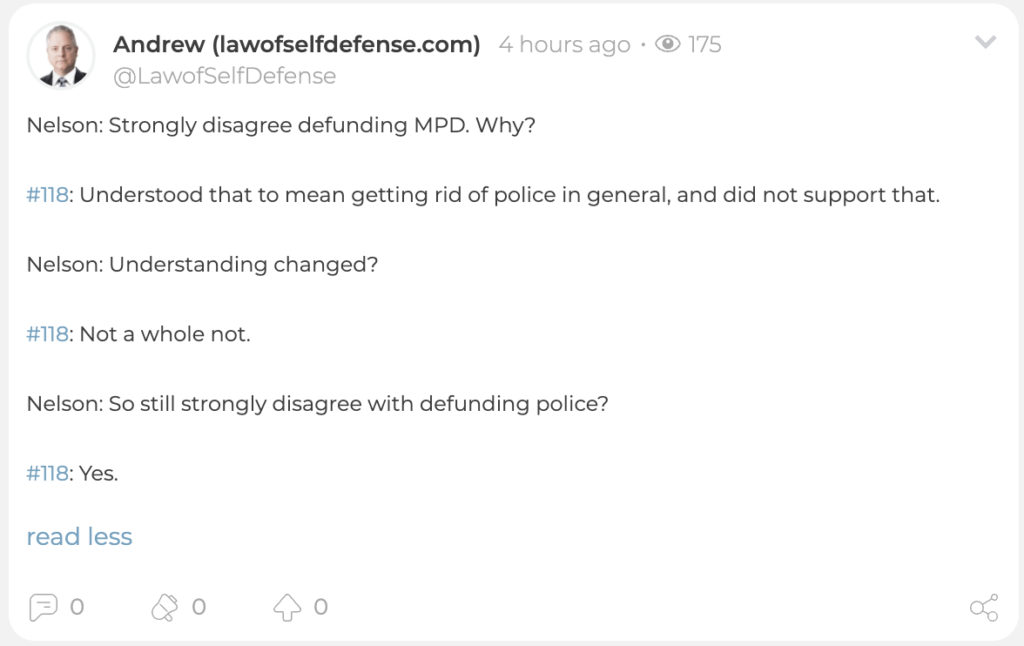 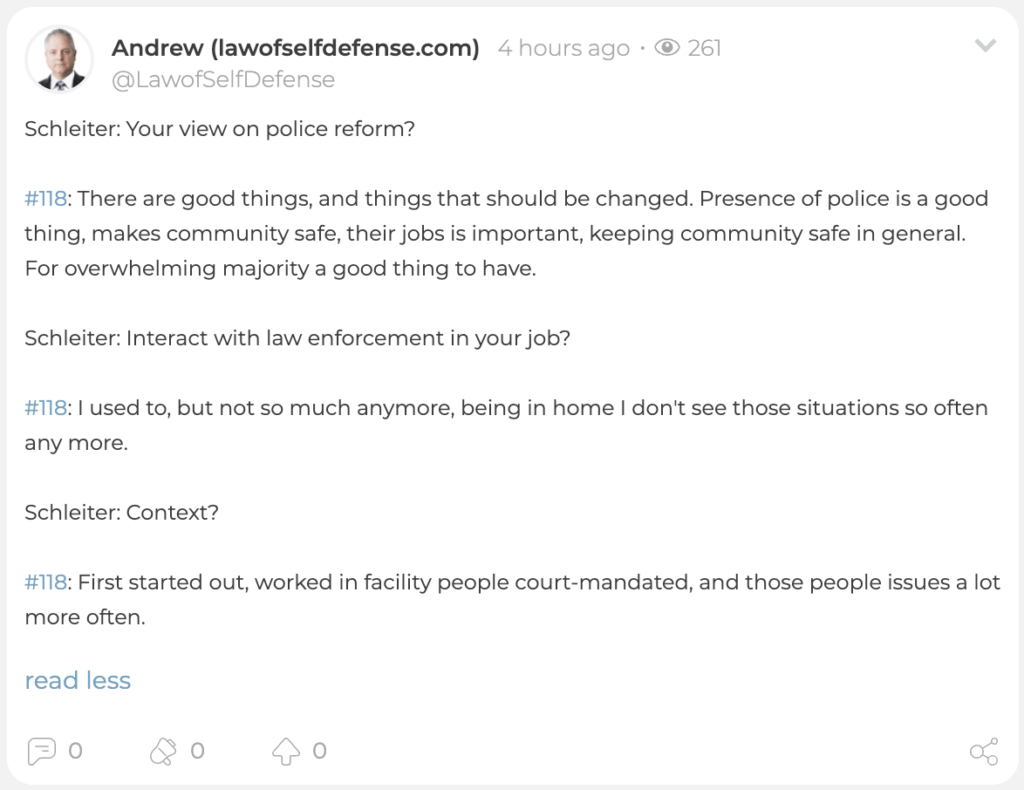 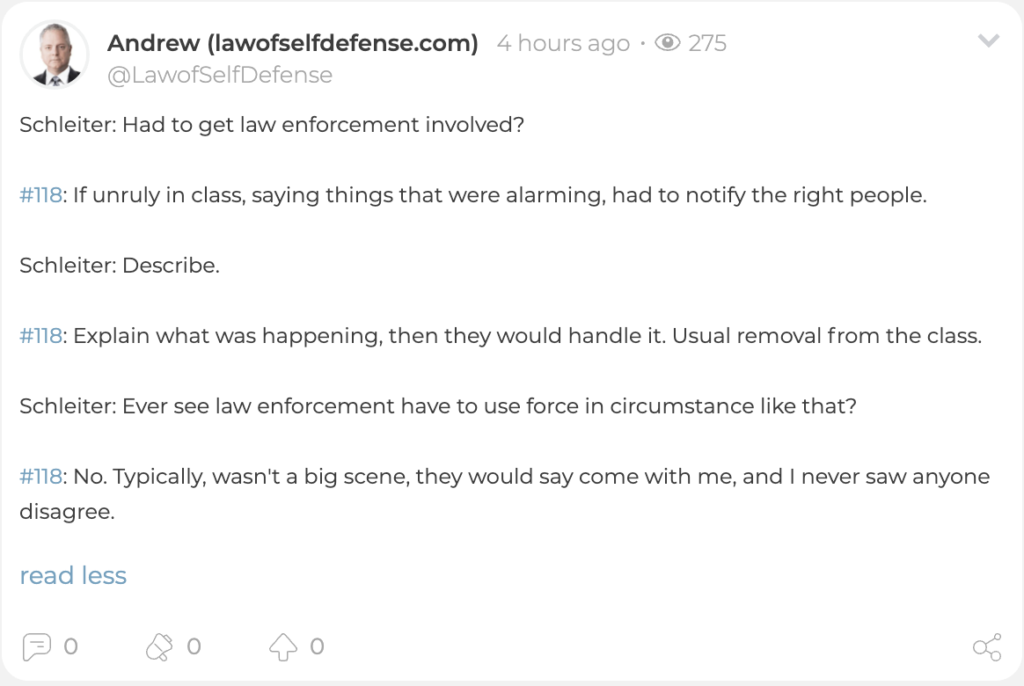 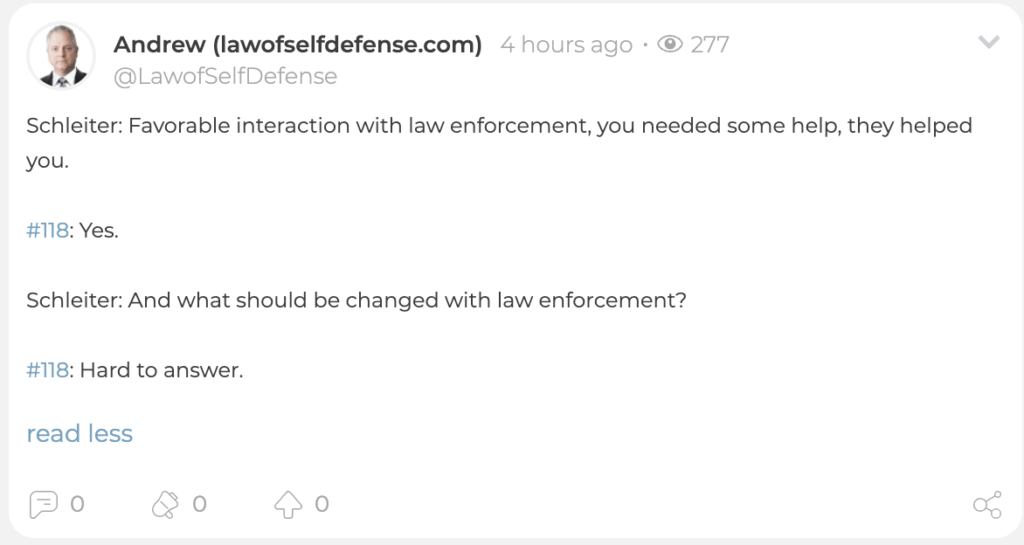 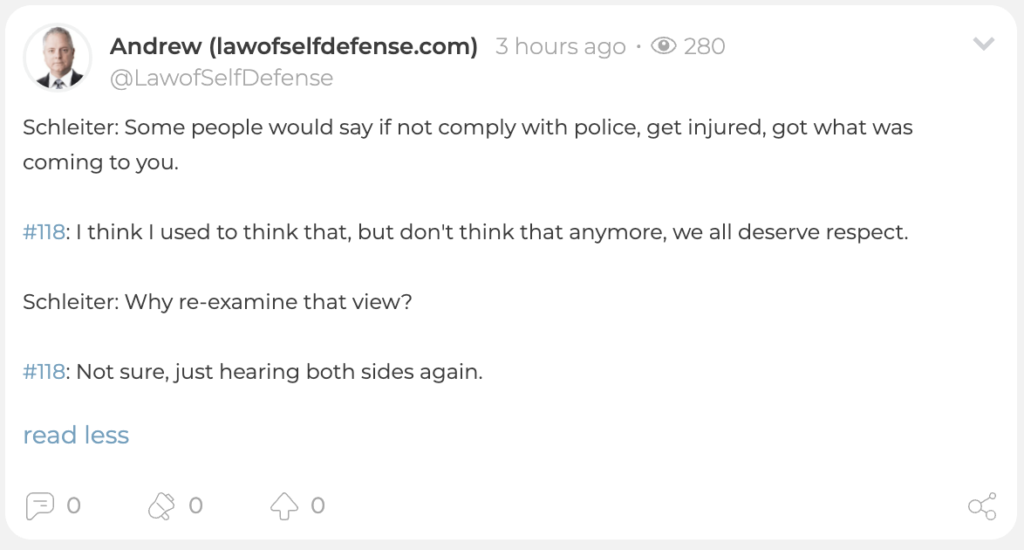 Voir Dire of #115: Stricken by the Defense

Voir Dire of #121: Stricken by the Defense