Of these only one was seated on the jury, #96, a female, making her the thirteenth seated juror.  More on #96 in a moment.

Four more–#99, #103, #110, and #113—were excused for cause, mostly a professed inability to serve impartially.  Usually this was disclosed during initial preliminary discussions with Judge Cahill, and without even requiring questioning by the parties.

One prospective juror, #109, a male, was struck by the state in the belief that he would be partial in favor of the defense. This leaves the state with three remaining peremptory strikes.

Conversely, prospective juror #111 was struck by the defense in the belief that he would be partial in favor of the state. This leaves the defense with five remaining peremptory strikes.

On Monday at 9:00am CT the court will continue voir dire again. With 13 jurors currently seated, only one more juror is needed to have the required 12 plus two alternates. Hopefully that can be done on Monday. Opening arguments in the case are set for Monday, March 29, and the trial is anticipated to take four weeks plus deliberations (although this is largely, of course, a guess).

Prospective juror #96, a female, described herself as a dog lover and an advocate for affordable housing in Minnesota.  She had a modest concern for her safety if on the jury, but did not believe it was sufficient to sway her to a particular verdict.

She agreed that two people who view the same event could have different perceptions of it, and that this difference could be driven by past experiences and training.

Asked if she could arrive at a verdict based only on the evidence in court, and if she could apply the law as instructed even if she disagreed with that law or thought it should be changed, she indicated that she could.

In her questionnaire, #96 had described her understanding of the events of Floyd’s death as him being claimed to have passed a counterfeit bill, the police were called to the scene, that several bystanders expressed concerns during the arrest asking officers to get off Floyd, and that their restraint of Floyd was responsible for Floyd’s demise.

When asked by defense counsel Nelson if she had concluded that restraint was the cause of Floyd’s death, #96 indicated that she had, based only on the video. She also agreed that the burden was on the state to prove cause of death, and that the video told only a “snippet” of what happened.

Juror #96 also wrote in her questionnaire that I was sad that a person’s life was lost over a counterfeit bill, and that things should have happened differently, but agreed the she didn’t know what happened prior to the restraint, if there was a confrontation prior.  When asked by defense counsel, however, she professed she was open to the notion that once informed of police training and procedures she might conclude that what was done by officers was proper.

At this point in voir dire the court went not just off audio but completely in camera—meaning, even courtroom spectators and media were removed—to discuss some sensitive matter with #96.  This took quite some time—about 27 minutes—but obviously wasn’t ultimately fatal to her being seated as a juror.

Upon questioning by Prosecutor Schleiter, #96 stated that to a certain extent the way a police officer treats a suspect is a function of how that suspect treats the police officer.  She also noted that if a suspect was not complying with an officer’s lawful orders, obviously the officer would have to take steps to address that. That said, she acknowledged that bad behavior by a suspect didn’t not license the officer to use whatever force he wanted.  She also thought it important to understand the proper procedures for use-of-force by officers, and to determine whether those had been followed.

On whether she thought the criminal justice system treated blacks and whites equally, she somewhat believed that it did not, but that this disparity was largely based on economic rather than racial reasons.

Obviously, the state is claiming that Floyd was asphyxiated by chest and neck compression, but for almost the entirety of his restraint Floyd was speaking. If one believes breathing is required for speaking, then clearly Floyd was breathing while he was speaking. 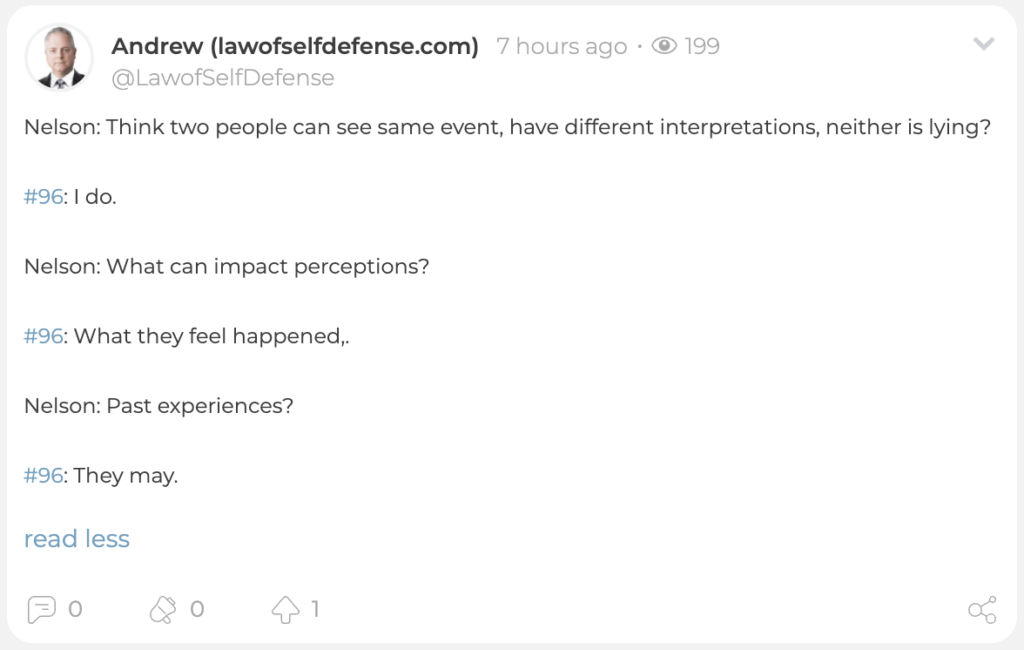 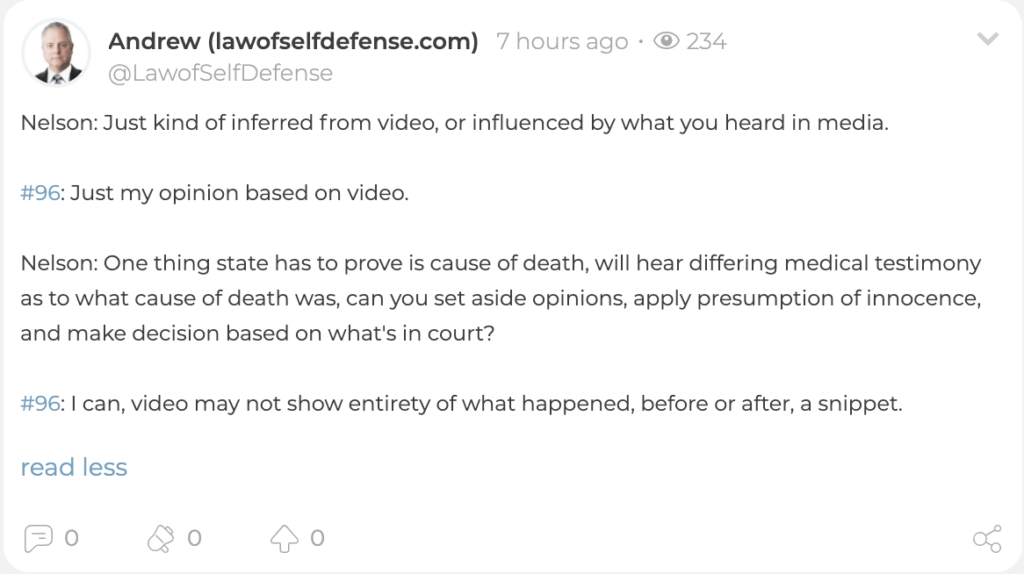 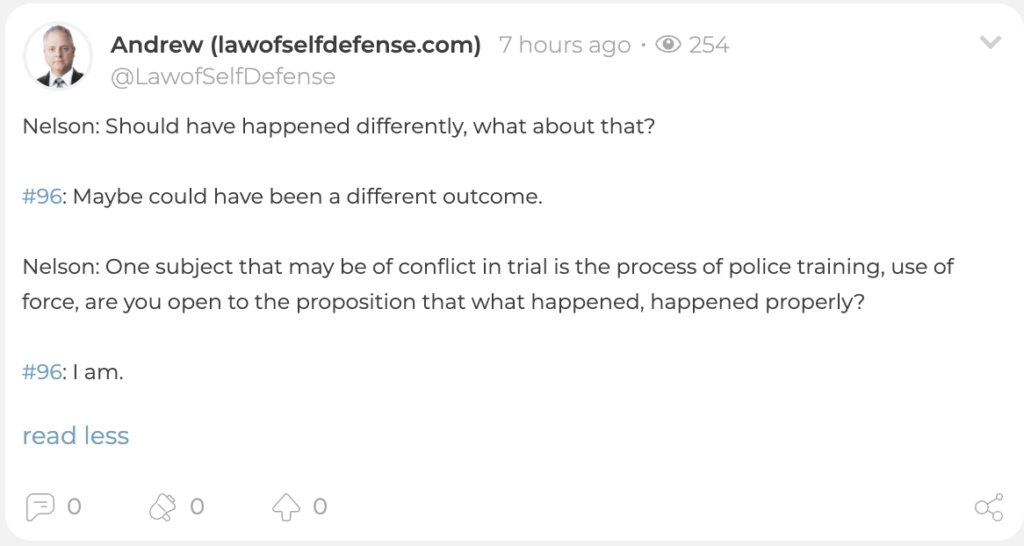 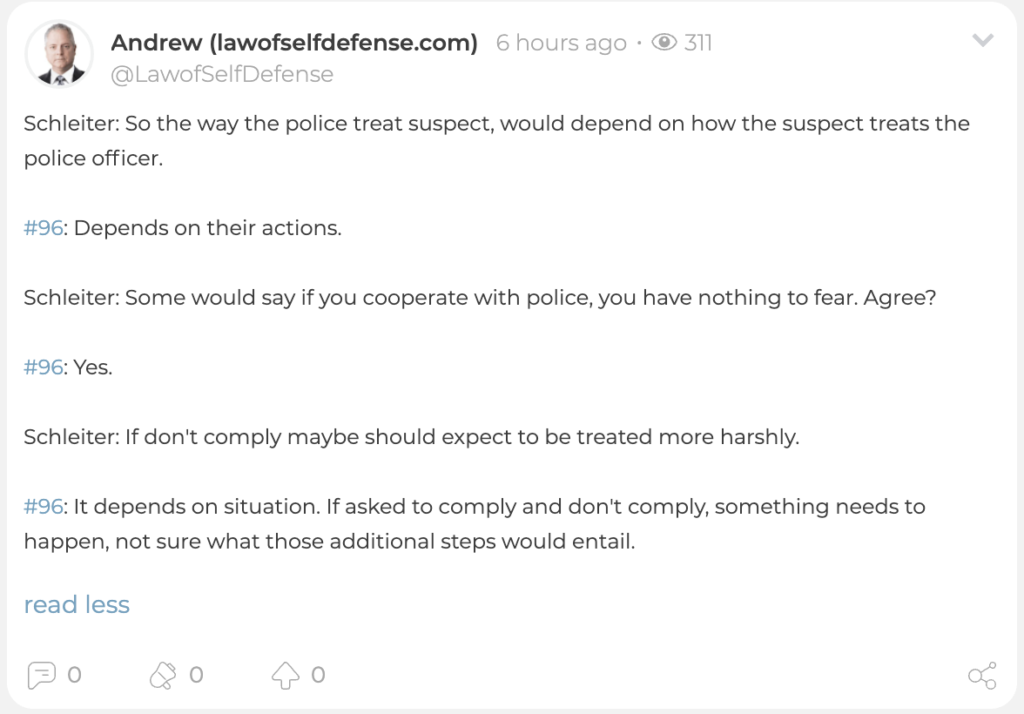 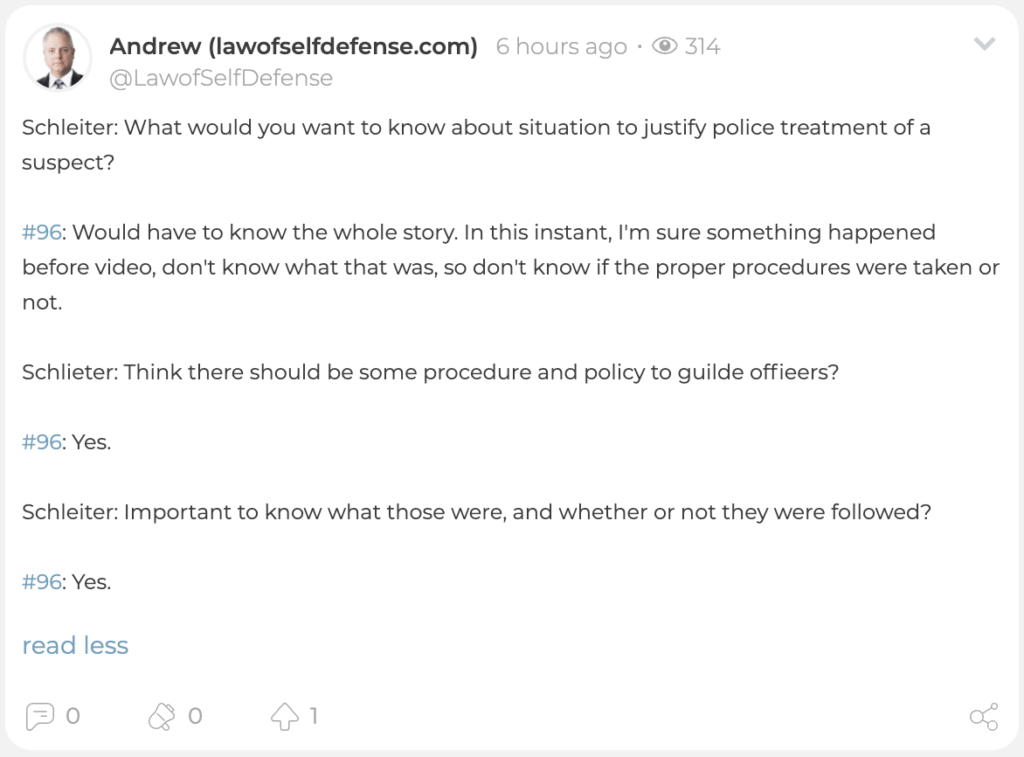 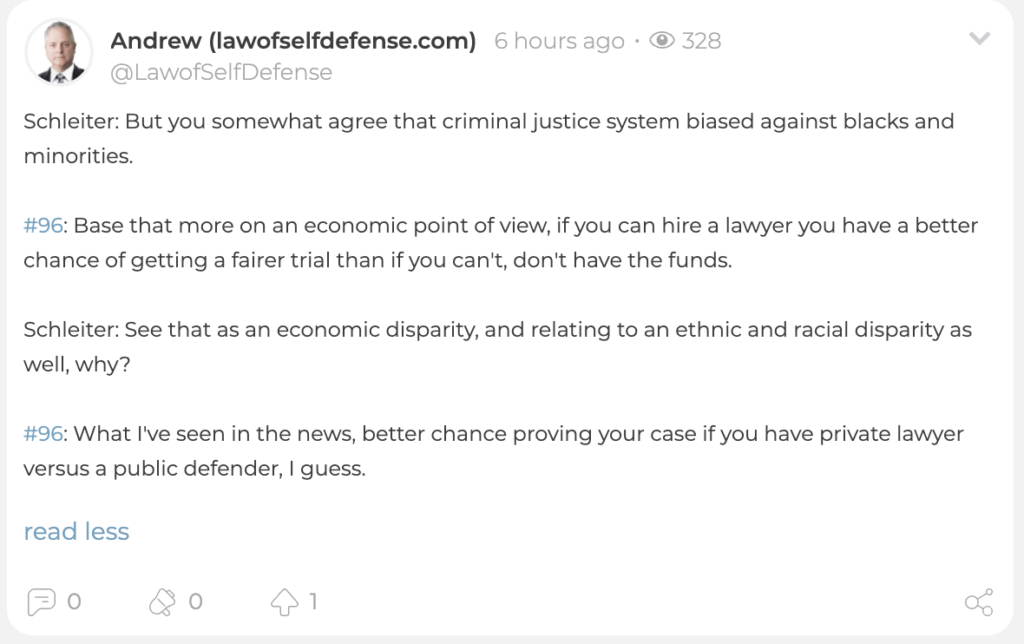 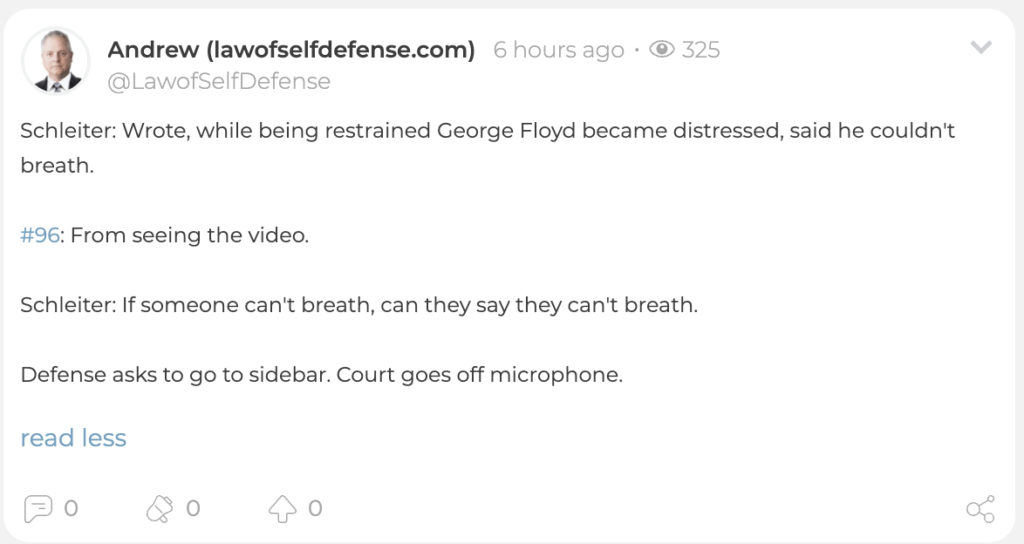 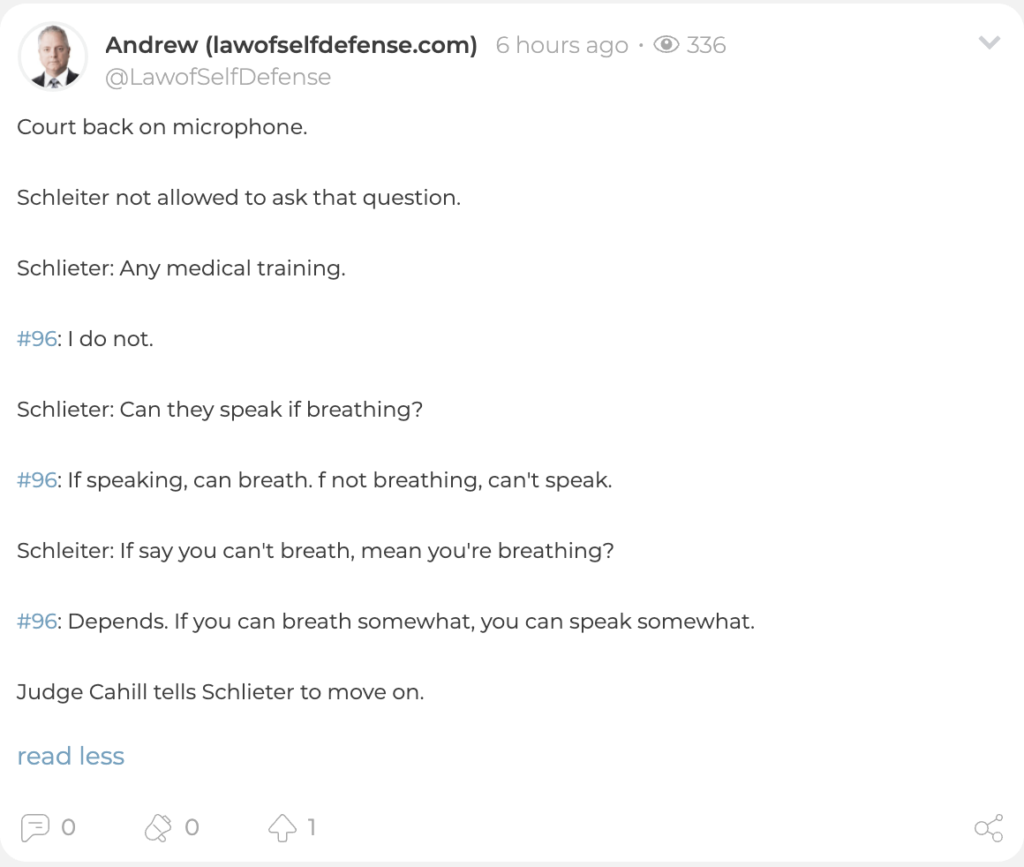 Ultimately, both the defense and state passed for cause, meaning she was acceptable to both of them, at which time Juror #96 was seated as the 13th juror in this trial.

Here is the video of the voir dire of juror #96:

I won’t spend much time on juror #109, who was struck by the state, but include this voir dire in the interests of completeness.

Prospective juror #109 surely put himself on the prosecution’s radar screen when he announced that he thought that the officers who responded to the Floyd call were applying their training, and that the notion of defunding the police was idiotic.  He also noted that since the incident crime in Minneapolis had exploded out of control, was still out of control, and that he didn’t see any police in his community any longer—as an aside, he lives not far from where Floyd’s death occurred, and the nearby riots had genuinely scared him.

Prospective juror #109 also had some family members who were in law enforcement, although no one terribly close, and he claimed this would not prevent him from being impartial. 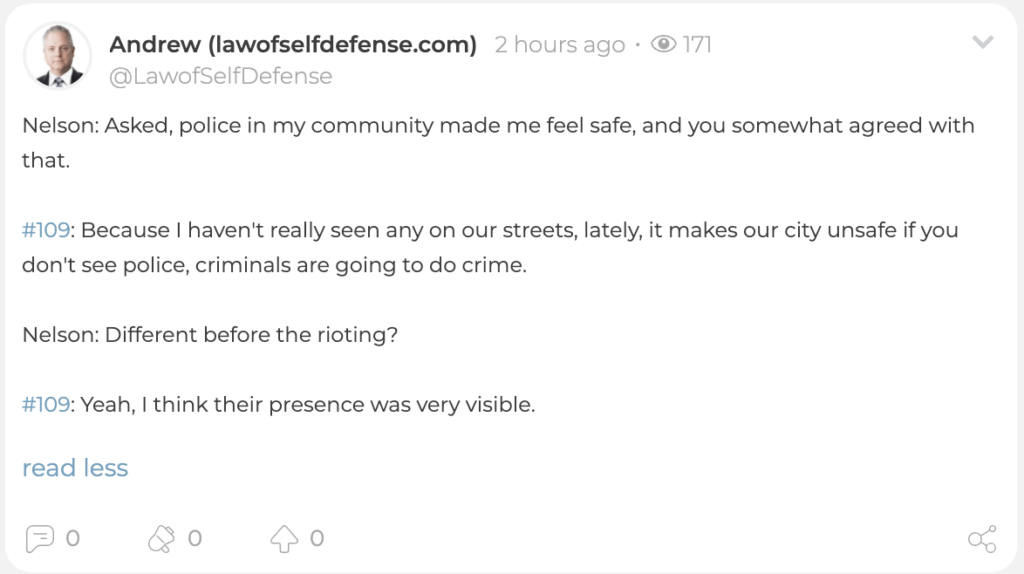 Ultimately, however, the state professed that they perceived #109 as being evasive on the question of whether he would favor police testimony. They attempted to challenge for cause, which Judge Cahill denied, and so they removed #109 using one of their peremptory challenges, leaving them with three remaining challenges.

Here’s the video of the voir dire of prospective juror #109:

Prospective juror #111 was a college student majoring in rhetoric, who self-described himself as being heavily tattooed.  As has become the pattern, #111 professed his ability to be fair and impartial in this case but was quickly exposed as having many red flags when the defense stepped through his questionnaire responses.

In particular, it turns out that following Floyd’s death #111 had marched in protest demanding that Chauvin be fired, criminally charged, and brought to trial. He’d also participated in protests carrying a sign that said “No Justice No Peace.”

In the questionnaire #111 also expressed the opinion that the officers in general had “caused Floyd’s death,” that Floyd had died “with his face in the street,” and that the event had at least “opened a conversation about “racism and police.”

Prospective juror #111 described conversations he’d had with friends and family in which he characterized the force used against Floyd as “excessive,” and that how Floyd was treated by Minneapolis police was indicative of how black men in American were treated by police generally.

When asked by defense counsel if he believed that the police are racist, #111 answered “Not inherently.”  When asked if the police are systematically racist, #111 had a long pause, then said that counsel would need to be more specific. (I guess that’s some of that rhetoric education, right there.)

Asked that given that given that he’d apparently formed the opinion that defendant Chauvin was racist, would he be able to set that belief aside and be a fair and impartial juror, #111 answered, “Yes.” 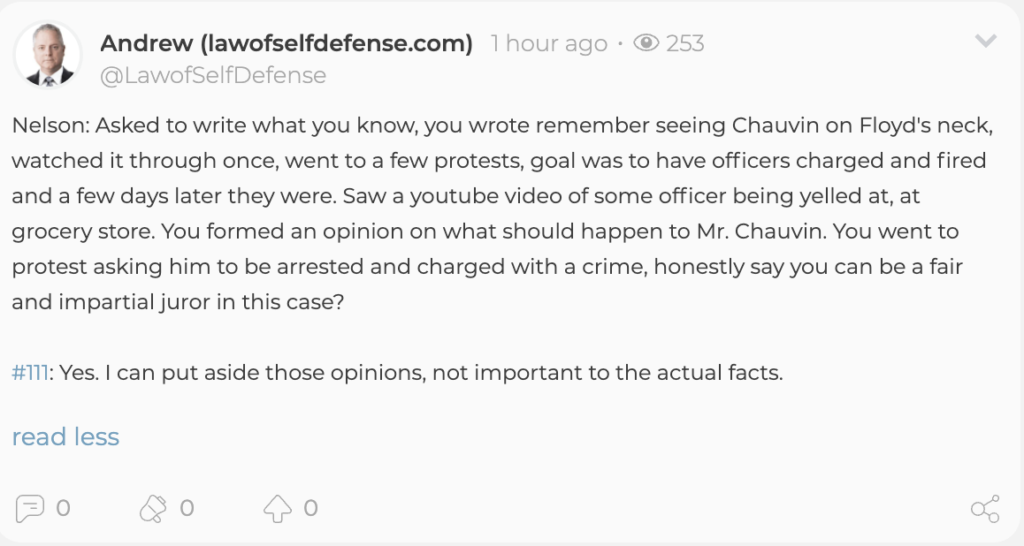 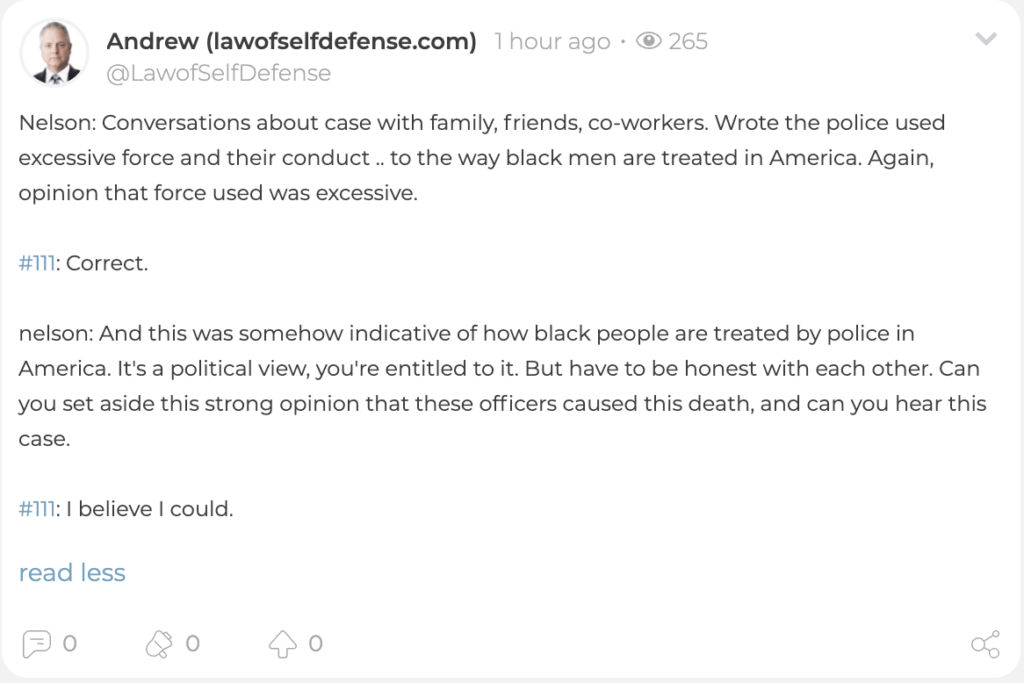 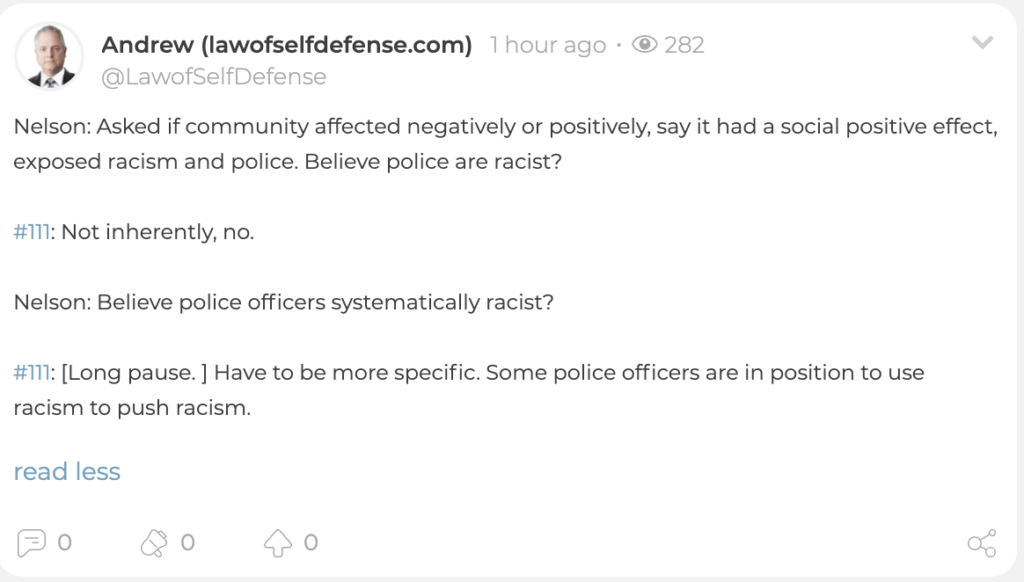 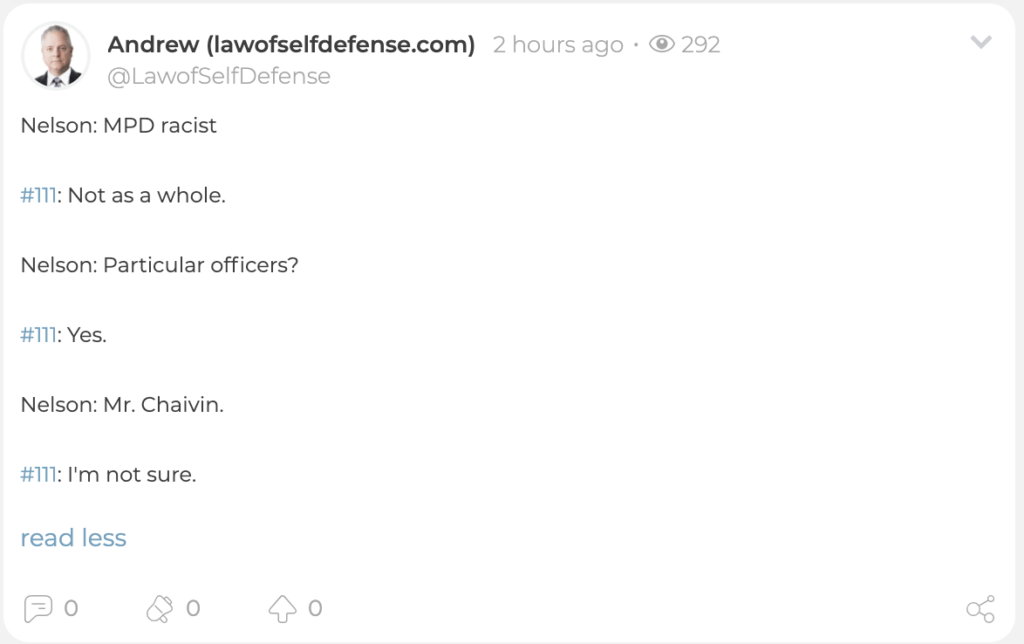 At this point the court recessed for its afternoon break, and 24 minutes later returned to have the defense promptly strike #111 using a peremptory challenge. This leaves the defense with five remaining peremptory strikes.

Here’s the video of the voir dire of prospective juror #111.