Today completed the third day of jury deliberations in the trial of Kyle Rittenhouse, with no verdict being achieved before the jury was sent home for the day.

There wasn’t much real action today, with the exception of a couple of notable events, and my own increasing belief that we’re dealing with a single hold-out juror for guilt, and that this juror is #54, the foreperson.

FREE: Our best-selling book: “The Law of Self Defense”

Early in the day, the judge called the court into session with just the lawyers, and no jury, to inform them that apparently a freelancer for some arm of NBC News was believed to have been following the jury bus when this freelancer was pulled over and cited for running a red light.

The concern, of course, is that this person was seeking to photograph or otherwise identify the jurors.

The judge announced that not just that individual but NBC News generally would be excluded from the courthouse for the duration of the deliberations.

Here’s the brief explanation by Judge Schroeder of those events:

When the jury was brought into the courtroom for purposes of dismissal, shortly after 4:00 p.m. Wisconsin time, Judge Schroeder imprudently asked if any of them had any questions for him.  One did.  A woman juror asked if she could be permitted to take home a copy of the 36 or so pages of jury instructions.

The judge looked over at the parties, and although the State appeared to make no particular signal, defense Attorney Marc Richards shook his head slightly but observably in the negative.

Despite this, Judge Schroeder announced that he would agree to the request and that the same option would be extended to all the jurors.  Whether only the one juror who made the request ultimately took home the instructions, or whether multiple or even all jurors did so, is unknown.

Frankly, it’s rather remarkable that any juror who had already been struggling with the instructions for more than 7 hours today alone, as well as the two prior days, would be interested in continuing to work with that at home in the evenings.

Frankly, I think it was a bad call both for Judge Schroeder to agree to this request, as well as to do so in the manner he did.

First of all, if he wants all the jurors to return to deliberations fresh and rested tomorrow morning, the last thing he should want is any jurors continuing to work on these instructions, alone, into the night.

Second, allowing the jurors to take the instructions home encourages what lawyers call the “dictionary game.”   This occurs when the jurors start to do their own research into what various terms in the instructions might mean—including looking words up in the dictionary.

The trouble with encouraging such behavior by the jurors is that a word—like, say, “provocation”—has a specific, narrow legal meaningsin the context of the jury instructions that differ from the general, broader, common-use meaning one might find in a dictionary.  Jurors are not supposed to make use of outside resources to inform their arriving at a verdict, but permitting them to take the jury instructions home encourages exactly that.

Third, the judge addressed this question from this juror in front of the lawyers and looked to them for a response.  That means that Mark Richards’ shaking of his head, indicating he preferred the jurors not to be given the instructions despite the request, could be observed by the jurors.  Richards appearing to prefer the denial of the juror’s request could be perceived negatively by that juror and others, creating a bias against the defense.

The judge should instead have either discussed the request with the lawyers while the jury was removed from the courtroom, or more conveniently have held an impromptu whispered bench conference with the jury present but outside of their range of hearing.

Next, I have my suspicion of what—or, rather, who—is holding up a verdict in this case:

FREE: Our best-selling book: “The Law of Self Defense”

My Suspicion: Juror #54, Foreperson, Is the Holdout Against Acquittal

I have a growing suspicion that this jury has not yet arrived at a unanimous verdict of acquittal only because of the resistance of juror #54, a woman who also happens to be the foreperson, who seems to be the hold-out against acquittal.

The jury selection risk to Kyle was always going to be that a “mask Karen” type, usually of leftist political persuasion, bossy, entitled, and status-sensitive, would be seated on the jury.  Such a person would be most unlikely to ever vote for acquittal—her social group would necessarily know she had done so, given the unanimous nature of an acquittal.

In addition, this type of person is likely to seize the leadership position of foreperson on a jury, to suit their bossy and entitled nature.  Such a person also tends to be outspoken and forward in circumstances where other people would defer to apparently higher authority.

There has been one apparently female juror who on several occasions can be overheard being unusually familiar with Judge Schroeder—not in the sense of knowing him personally, but in the sense of engaging in a relaxed discussion that one does not usually find between a juror and a trial judge.

Then we have the jury note from yesterday asking for access to the Exhibit #5 drone video footage and related evidence.  It was written by juror #54, the jury foreperson, and an apparent woman: 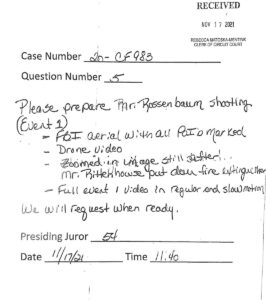 The tone of that note suggests to me that the person who wrote it is accustomed to giving orders to underlings—personal assistants, staff, household help—and here the note is being addressed in this tone to the trial judge as if the judge were a staffer to the jury foreperson.

Then this evening we had the very unusual request to be permitted to take the jury instructions home, made by a single juror—a female juror.

I suspect that all of this conduct is that of juror #54, the female foreperson of this jury—who I suspect is precisely the kind of “mask Karen,” left-leaning, bossy, entitled, and status-sensitive juror that would be most likely to hold out against acquittal.

Finally, my friend Jack Posobiec (@JackPosobiec) was kind enough to remind me that during jury selection I’d made a particular note of juror #54 at the time, as I was live commenting right here at Legal Insurrection:  “#54: Knows some of the witnesses named, but could set that aside.”  I’ve also heard from sources in a position to know that when polling was done around jury selection, prospective jurors who knew any participants in the August 2020 riots–which would likely include some of the witnesses–tended to trend 75% against acquittal.

That’s all just a guess—but one informed by some experience with both juries and mask Karen types.

Here’s the video of Judge Schroeder dismissing the jury for the day, including the discussion around taking the jury instructions home:

OK, folks, that’s all I have for you on this topic.