Welcome to this episode of our ONLY open-access content, our weekly News/Q&A Show. A transcript of the show is available below my signature, for those who prefer to read rather than view. Also, Law of Self Defense Members can access the show in audio form in the members-only Law of Self Defense Podcast.

Be sure to mark your calendar to never miss a News/Q&A Show–they air LIVE every Thursday, at 4pM ET of the Law of Self Defense Members Dashboard, our Facebook page, and our Youtube channel, and playback recordings are available on each of those platforms.

Now before we jump into the substance of today’s content, I do, of course, need to mention today’s sponsor, CCW Safe, a provider of legal service memberships, what many people mistakenly call self-defense insurance. They in effect promise to pay their member’s legal expenses if their member is involved in a use of force event.

And those expenses start big and get bigger, fast, folks. For example, imagine a case where you were threatened, you displayed your gun, you didn’t fire a shot didn’t hurt anybody—and now you find yourself charged with aggravated assault with a firearm, typically a 10-year felony.

If you’re charged with aggravated assault with a firearm, you’re looking at a retainer to your lead counsel on the order of $30,000 to $50,000. And that’s just for pre-trial work, folks, that’s not for going to trial. If it’s a killing case, where you’re charged with manslaughter or murder, you’re easily looking at $100,000 or $200,000 pre-trial expense, and just multiply that for the trial.

So, if you don’t have that kind of money stuffed in your mattress just in case you’re compelled to defend yourself and your family, it can be useful to have a financial partner standing behind you to make sure you have the resources you need to fight the legal battle, the way you want it fought—as if your life depended on it. Because, really, it does.  And that’s what CCW Safe offers to do.

One of the biggest reasons I favored CCW Safe over other similar offerings is that many of those others simply don’t provide the level resources you need for an adequate legal defense. If you’re looking at a “self-defense insurance” offer that caps out at $150,000 or $250,000, that’s simply not enough for a murder or manslaughter trial if you’ve killed someone in self-defense, as I’ve already discussed. In contrast, CCW Safe promises to pay what the defense costs, period, with no such cap.

And what if you lose a trial and you have to appeal. CCW Safe covers you on appeals again, with no cap. These other companies often say well, we’ll cover you up to the limit of the cap on an appeal. But of course, you’ll have spent all that money at the trial itself. So effectively, there is no coverage for an appeal.

So be aware if your plan that you’re looking at or already have has that kind of cap. I know $250,000 sounds like a lot of money, folks, and it is a lot of money, but not in the context of a criminal defense in the murder or manslaughter case. Read the fine print, folks, and understand what you’re getting—and not getting—from any such offering you’re considering.

Having said that CCW Safe is the best fit for me, whether they are the best fit for you is something only you can decide. But I do encourage you to take a look at what they have to offer by clicking the image or link below: 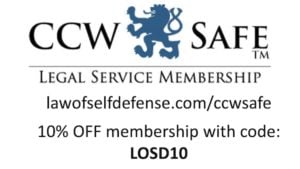 And if you do decide to become a member of CCW Safe, you can save 10% off your membership at that URL http://lawofselfdefense.com/ccwsafe, using the discount code LOSD10.

If you enjoy this kind of content and would like to get more, I’ve got great news—you can try out Law of Self Defense Membership for two weeks for a mere 99 cents—even better, in the unlikely event you decide it’s not for you during those two weeks, let us know and we’ll refund not just 100% of your money, but 200% of your money.  That’s a negative risk offer, folks.

Really, it’s hard to imagine why you anyone wouldn’t try  out Law of Self Defense Membership for 99 cents for two weeks.

Now, after the two-week trial, membership does go to the normal cost, which is still a very low, ~33 cents a day, less than $10 a month. Obviously, if you don’t feel the content we provide is worth 33 cents a day you shouldn’t become a member but I would hope that most of you would agree that it is, especially the content you won’t be able to get moving forward unless you’re a Member.

You can learn more about our 99-cent, 200% money back guarantee, two-week membership trial by clicking the image or link below: 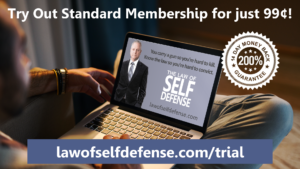 The other big piece of content we put out. So far this week is something brand new from us. It’s a free mini course on Self Defense Law. Many of you watching this show have taken our full day Law of Self Defense advanced course seven hours of instruction. We’ve taught it personally, hundreds of times all over the country. More commonly, these days, we teach it once or twice a year as a webinar, we just had a webinar advanced course a month or so ago. That’s a full day course, seven hours and it’s a fire hose of information. It’s obviously a big commitment of everybody. And of course, it costs money to attend that course, what we’ve done is we’ve created a very concise, abridged version of that course, a four module mini course on many of the most important topics covered in that full day course, each module is about, I think they average 10 to 15 minutes in length. So it’s something just under an hour’s worth of content. But it touches on the peaks of information, the mountain tops of information you need to know obviously, we can’t go into the same depth in an hour that we can in seven hours. But it provides you with the most important pieces of information you need to know.

And then it offers you the opportunity to dive deeper at considerable savings if you’d like to dive deeper with our more advanced courses, but the mini course itself is absolutely free. You can take advantage of that by clicking the image or link below: 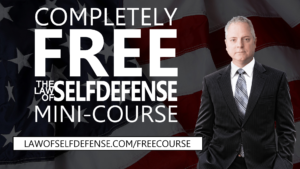 OK, folks, until next time …