IMPORTANT: At the end of this show a fellow lawyer was kind enough to send me a copy of criminal complaint for the arrest of Officer Chauvin, which includes an account of the events surrounding Floyd’s arrest and death. It specifically includes a statement among the officers expressing concern that they were dealing with an excited delirium suspect, so ED is definitely on the table for the defense, and will be extremely difficult for the prosecution to overcome in an effort to prove third-degree murder beyond a reasonable doubt.

NOTE: For future reference, you can find all our George Floyd coverage, freely accessible, using the URL:  lawofselfdefense.com/floyd

So Officer Chauvin has been charged with 3rd degree murder, and second degree manslaughter. I have embedded a copy of the criminal complaint at the bottom of this post, as well as links to the relevant criminal statutes.

Murder 3 requires no premeditation (which only takes an instant to form, anyway), but does require “a depraved mind” which is often hard to prove than premeditation.

Unless the state can show some pre-existing animus between Chauvin and Floyd, or some evidence of racism on Chauvin’s part, nothing I saw in the video would qualify as depraved mind.

As a result the Murder 3 charge strikes me as a “look, we charged him with murder, so please stop burning the city down” charge, much as when Marilyn Mosby charged the six police officers in the Freddie Gray case with charges as serious as murder, despite possessing no evidence from which a conviction of the officers could feasibly be obtained. (And none were, of course.)

The manslaughter charges may be more difficult to defend against, but if there’s a credible narrative of the officers performing an excited delirium call, and an absence of neck injury being a proximal cause of death, I don’t see manslaughter sticking either.

As noted, I expect the most probable defense in this case is going to be the narrative that the officers were performing, perhaps poorly, an excited delirium protocol, in which case Floyd’s death is a terrible tragedy but not murder or manslaughter.  I’ll explain excited delirium and the standard police protocols designed to address suspects suffering from excited delirium, in a separate post I’ll prepare over the weekend.

The more I look at this case, the more it looks to me like the cops were employing an excited delirium protocol. Maybe a shitty one, because they’d had shitty and perhaps no training on such things, maybe only knew what they’d read in some cop magazine, but I wouldn’t be at all surprised to hear that they’d radioed for EMT units precisely because they had come to believe they might be dealing with an ED case, and were aware that such cases were prone to sudden death.

I look forward to hearing those radio transmissions, seeing the medical examiners report (cardiac arrest, say, rather than asphyxiation or carotid dissection), toxicology (high levels of cocaine or PCP or bath salts, all highly associated with ED), and the officers’ own observations: “he was super hot to the touch, he was sweating like crazy, he was incoherent, he was unresponsive to pain compliance techniques, he was violently resisting being put in the squad car, fighting a group of us for at least 10 minutes, he seemed unusually strong, he was trying to run into traffic, the fight went to the ground, he complained about having difficulty breathing although he was speaking so clearly was breathing, it took him forever but he finally stopped struggling against the arrest” all highly associated with ED.

The protocol is then to immobilize the suspect as much as possible, put as many bodies on him as you can, especially prevent heavy exertion of their large muscle groups, forget about the squad car and call for EMT, just hold the suspect as still as possible, immobilize his head, keep him from hurting himself or others, because you’re dealing with a medical emergency with a real risk of sudden death.

That’s what I see in the picture below.

And an imperfectly performed excited delirium protocol is not murder, especially if training on the topic was deficient or non-existent. 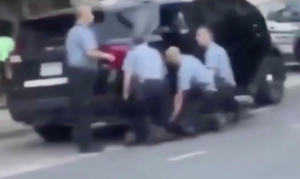 I plan to have a show dedicated entirely to excited delirium available for Law of Self Defense Members by Monday.

Here is that embedded criminal complaint I promised:

For those interested, here are the relevant Minnesota murder and manslaughter statutes, as well as an assault statute that can be a predicate for manslaughter:

In the meantime, remember: