Tonight, Tuesday, April 27, I will be guesting on the Tim Pool IRL Show on YouTube.  If you’re not familiar with Tim Pool generally, or this show specifically, you really ought to be.  Tim is an independent journalist who brings a remarkably open-minded perspective to the societally-important stories that he covers.

And that approach to covering such stories has paid off, with Tim’s various YouTube shows having collectively received over a billion views—that’s not a typo, folks, OVER A BILLION—he has well over a million actual subscribers to his shows generally.

Now, it appears that Tim has several distinct shows, and I believe the one I’m on is called “Tim Pool IRL.”  These shows are generally in excess of two hours in length, so that will give us plenty of time to dive into the just-completed Derek Chauvin trial, perhaps other past high-profile use-of-force cases, as well as upcoming cases such as the trial over the Ahmaud Arbery killing, the McCloskey brandishing in St. Louis, and of course the Kyle Rittenhouse trial.

I believe his production practice is to air the show live, in real-time, as it’s being conducted, and then to make that recording of the show available for some short time afterwards, all at the YouTube channel you can access by clicking the image or link below: 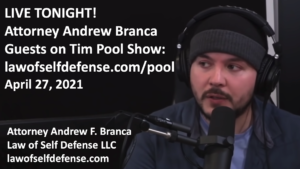 Also, if you do join us for my guest appearance on Tim’s show, I’ll also be making available a very special opportunity for any and all of you to become genuine masters of self-defense law, so you’ll want to be prepared to take advantage of that, as well.

OK, folks, I hope to see a bunch of you join us for tonight’s show!