Welcome to our ongoing post-trial coverage of the Minnesota murder trial of Derek Chauvin, over the in-custody death of George Floyd.  I am Attorney Andrew Branca for Law of Self Defense.

I wrote up this blog post just as the verdict was being announced—as I’m sure you all know, guilty on all counts—but given that Prosecutor Blackwell’s contemptible closing rebuttal will certainly be grounds for reversal of these convictions, and the issues discussed in this content are an important facet of that rebuttal, there’s good reason to go ahead and make this available despite the verdict.

Incidentally, if you’re enjoying this content on the day of publication April 21, 2021, you might be interested in the Derek Chauvin Post-Trial Analysis webinar I’ll be doing live with Professor William Jacobson over at Legal Insurrection tonight at 8PM EDT.  We’ll each provide our own perspectives on the trial and the political dynamics surrounding the trial, as well as have live Q&A. If the timing doesn’t work, or is already passed when you learn of this, you can also catch a recording of the webinar after the fact.

Either option requires a free registration, which you can do by clicking the image or link below: 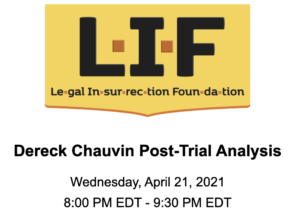 OK, with that out of the way, let’s jump into the big lie of the 3-minute-plus restraint while pulseless.

Politically energized prosecutions often lack factual or legal merit, and thus to satisfy the mob and advance the baseless prosecution it’s necessary to build the case upon a foundation of lies.  We’ve certainly seen that in many of these high-profile cases, including the George Zimmerman trial (the lie: got out of car after being told by police not to do so), the Michael Brown case (the lie: hands up, don’t shoot), the Jacob Blake case (the lie: he was unarmed) and many more.

Unfortunately, once the public has been drowned in these propagandistic lies for months or years, it becomes their “lived truth,” and almost nothing can expose that lie for what it is.  It is simply believed as a truth, forever, and on a societal-wide scale.

Now we’re seeing the same development in the Floyd case. It’s become common to see claims on the internet that Derek Chauvin continued to restrain Floyd as long as three or even four minutes after he knew Floyd no longer had a pulse.  And it’s not just the internet, it’s the actual prosecutors, as well.  This is what Prosecutor Blackwell said in his closing rebuttal just yesterday:

Why is it necessary to continue applying deadly restraint to a man who is defenseless? Who is handcuffed? Who is not resisting? Who is not breathing? Who doesn’t have a pulse? And go on and do that for another three plus minutes before the ambulance shows up? And then they continue doing it. How is that a reasonable exercise in the use of force?

The handcuffing of Floyd, Floyd’s cessation of breathing, Officer Kueng’s inability to find a pulse, are all events that took place at different times—obviously, Floyd was handcuffed a considerable period of time before the officers had reason to believe he was not breathing or couldn’t find a pulse.

Fortunately, we can know the exact times that various events happened, from the various video footage, particularly the body worn camera (BWC) footage of the various officers, whose BWC time stamps are all synchronized.

Particularly helpful for the purposes of this discussion is the BWC of Officer Kueng (serial ending 5AT) from the period just preceding the first and only check for pulse by the officers, until the arrival of the paramedics.  I’ll be referencing that video clip throughout this post, so I’ll provide it up-front here:

And heres’ a written transcript chronology of dialogue during this segment, with timestamps:

I’ll ask that you accept my word that this brief segment includes all relevant mentions by the officers of Floyd’s breathing and pulse. In the event that you want to verify that claim, however, I’ve also embedded the entirety of Kueng’s and Lane’s body camera footage of this event, from start to end, at the bottom of this post.

We know that the paramedics are on scene, at Floyd’s side, at 20:27:41, as evidenced in this screen capture from Officer Lane’s body camera at that time, in which you can see the paramedic just beyond Chauvin, in the upper left of the image, and the timestamp (as always) in the upper right (both highlighted in red): 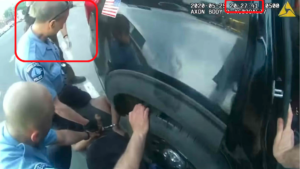 So, if we accept that the critical events here in the sequence cited by Blackwell in his quote above are not the handcuffing, but the issues of breathing and pulse, the question is what do we know about those events from Officer Kueng’s body camera?

Well, we know that Floyd was still visibly moving at 20:24:43, so there would be no need to check for a pulse prior to that point in time.

We also know that the officers believed that Floyd was breathing at least to timestamp 20:25:13, at which point either Chauvin or Kueng (it’s unclear which) comments, “He’s breathing.” That’s about 2 1/2 minutes before the paramedics arrive, and Floyd hasn’t stopped breathing yet.

In other words, Blackwell’s apparent claim that the officers kept Floyd restrained for three-plus minutes after he stopped breathing is demonstrably untrue.

Worse, however, is the claim of three-plus minutes of restraint in the context of an absence of pulse.

The first time any of the officers are unable to find a pulse on Floyd is at 20:26:00. That’s a mere 1 minute and 41 seconds before the arrival of the paramedics–a far cry from “three-plus minutes.”

Once again, Blackwell’s apparent claim that the officers kept Floyd restrained for three-plus minutes after he had no pulse is also demonstrably untrue.

These are false claims of fact made to the face of the jury after the defense has no possible means of correcting the falsehood, and moments before the jury goes into deliberation, on one of the most important issues in the weeks-long trial. Maybe not grounds for a mistrial if the falsehoods are corrected prior to deliberations, but they were not corrected.  Grounds for reversal of a conviction? I would think so.

But that’s not even the most important facet of this issue of restraint and pulse in this case, at least not in the context of whether Chauvin is guilty of a crime.

More important to the question of guilt is what Chauvin actually knew, because that’s all that could have informed the decision-making of a reasonable officer.  And all the Kueng BWC video tells us about there being no apparent pulse at 20:26:00 is that Officer Kueng could not find a pulse–it does not inform us that Officer Chauvin was aware that Kueng could not find a pulse.

That is, the only evidence on this issue of inability to find a pulse is relevant solely to Officer Kueng.  We can hear him saying “I can’t find one,” after checking for a pulse, at 20:26:00, as noted.

Well, one reason could be that Kueng’s body camera microphone is only inches from Kueng’s face, crouched over Floyd, much closer than Kueng’s face was to Chauvin’s ear.

In addition, there was a great deal of other audio sources demanding Chauvin’s attention. Indeed, at the identical time that Kueng states “I can’t find one,” the police radio is chattering loudly, and Chauvin surely would have been listening for radio reports of EMS progress to the scene. In addition, concurrent with this broken exchange between Chauvin and Kueng regarding pulse there was another dispatch call involving a suspect pointing a gun at a crying child–it’s difficult to think of a call that would be more distracting to the attention of a police officer.

Further, Chauvin was positioned around the rear fender of squad 320, and far more exposed to the angry shouts from the crowd than was Kueng—and the crowd at this precise moment was exceptionally loud.  It seems quite possible that between Kueng speaking, the radio chattering, and the crowd shouting, that Chauvin simply never heard Kueng’s “I can’t find one.”

Indeed, immediately after Kueng makes that statement, amid radio chatter and crowd noise, Chauvin responds, “Huh?” This suggests that he heard Kueng say something, but didn’t hear exactly what was said.

Kueng then responds to Chauvin’s “Huh?” with “I was checking for a pulse.”

Note what Kueng does not say here, after Chauvin indicates a need for clarification.  He doesn’t say, “I was checking for a pulse, and I couldn’t find one.”  Kueng may have presumed that Chauvin heard his first earlier statement, “I can’t find one,” but perhaps merely didn’t understand the context.  In that case, the follow-up “I was checking for a pulse” would appear to Kueng to sufficiently clarify the matter.

But from Chauvin’s perspective, which is what controls for purposes of his trial, if all he heard in an understandable manner was the second statement “I was checking for a pulse,” in the absence of having understood Kueng prior statement that he hadn’t found one, Chauvin might have reasonably inferred that Kueng had found a pulse—after all, not finding a pulse is important information that wouldn’t be left unsaid, and as far as Chauvin knew it had not been said.

And that was the last discussion of pulse between the officers.

The bottom line here is that it’s quite possible that Chauvin never knew, prior to the arrival of the paramedics, that Floyd was without a pulse, and thus that there was zero time during which he was knowingly restraining a pulseless Floyd–in which case, continuing to restrain Floyd for the arrival of expert medical care would simply have been prudent “in custody, in care” police practice, and not criminal conduct or denial of emergency care at all.

On this last point, I’m obliged to note that it would have been helpful for Nelson to have made this argument to the jury during his own closing, using precisely this video clip above to illustrate this point.

As promised, here’s the full-length video of the Kueng BWC footage (serial ending 5AT):

And here’s the full-length video of the Lane BWC footage (serial ending 5Z7):

OK, folks, that’s all I have for all of you for now.

Before I go, in view of the ongoing riots periodically raging across the nation, I’ve also taken the liberty of putting together a special opportunity to access our best-selling course, “Lawful Defense Against Rioters, Looters, and Arsonists,” available in both online streamed and DVD formats.  You can learn more about that course, by clicking here.

And thanks, as always, to both Legal Insurrection and CCW Safe for the support that makes my coverage of this case possible.

Attorney Andrew F. Branca’s legal practice has specialized exclusively in use-of-force law for thirty years.  Andrew provides use-of-force legal consultancy services to attorneys across the country, as well as near-daily use-of-force law insight, expertise, and education to lawyers and non-lawyers alike. He wrote the first edition of the “Law of Self Defense” in 1997, which you can now order in its current edition for just the price of shipping and handling by clicking here.  To know YOUR state’s use-of-force laws in an actionable way that will keep you safer physically and legally, take our state-specific advanced use of force class either streamed online or via a shipped DVD with a 100% no-question- asked money-back guarantee, here:  Law of Self Defense State Specific Use-Of-Force Class.

13 thoughts on “Chauvin Trial: The Big Lie of the 3-Minute-Plus “Restraint While Pulseless””